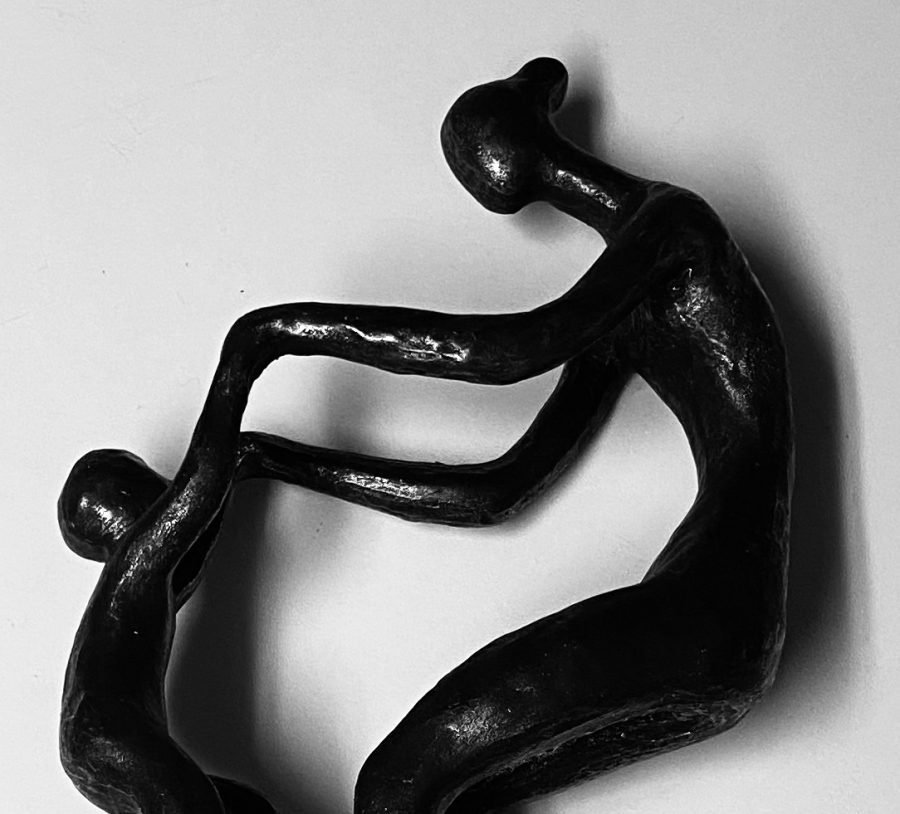 Growing up, it was always just me and my mother. We lived in a small, white townhome on the outskirts of Ann Arbor, Mich., near the border of Ypsilanti. There was a maple tree outside — over 16 feet tall —and every October, it shed its orange leaves that would crumble on the grass. The dark brown wood fence chipped away over time, and the front green door always stood welcoming and strong.

At six years old, I had a key on a University of Michigan keychain, and I knew how to open the door. Inside, there were burlywood brown carpets, and rough, yet fuzzy, black couches. In the dining room, there was a lucent glass dining table that I was always afraid of breaking and the frail white chairs that me and my mother sat in — always across from each other.

Our small kitchen had gas burners where my mother taught me how to cook eggs. I cooked eggs by myself for the first time when I was six years old. As I turned on my gas stove, I heard the “click, click, click.” When I cracked the large, brown, viscid eggs into the crackling pan, I usually dropped a piece of the shell; I would always pick it out with my hand, terrified I was going to burn myself. When making eggs, I always stood on my green stool with white legs, and I was constantly stretching my arm to toss and turn my eggs until the outer edges turned crispy brown. I always had a fear that I was going to burn the house down.

When my mom was at work, I would often sit alone in the living room and stare outside through my frosted white glass door. I would watch as the birds chirped and searched for worms, tearing the worm’s body into two.

Our townhome had two stories, and I would fill some of my time jumping single-legged up the stairs; I wanted to see how far up the stairs I could get up without having to use our white, wooden staircase railing. I hopped my way up the stairs to my room. I would sit on my red plastic chair with blue legs at my undersized wooden desk that was two feet tall and was rutted and dry. It made a “zip-up” sound whenever you scratched it. The chair also had a hollow slot in the back where I kept my coins and stuck dentist stickers.

I learned and taught myself how to become an adequate problem solver, and if I ever had trouble with a math problem, YouTube became my teacher. I never wanted to feel like a burden on my mother because she was always weary. She became my last resort: I only bothered her if I really thought it was necessary.

At my desk, I also built many of my favorite Legos. One, in particular, was my Millennium Falcon from Star Wars, which had over five-thousand pieces. I found building Legos to be my escape from the desolation in my heart. I learned very young; I had to find ways to pass my time and learn new skills.

The only teacher I truly had was YouTube. It was my only credible source. When no one was around, YouTube taught me the answers to my questions: How do I do a backflip? Will a watermelon grow inside of me if I swallow the black seeds? Will I die if I swallow gum? When I had enough of being inside, I would ride my candy red bike with black handles around my neighborhood. YouTube taught me how to do tricks, how to ride with no hands, how to stand on the seat while having my hands still on the handlebars and how to sit on the metal rail in between the seat and the handlebars while still riding the bike. Somedays, I would be able to perform the tricks, and some days, I would lose my balance and fall down on the rocky, beige, cracked pavement, scraping my hands and knees.

Right after school, one day, I practiced the new tricks I had learned. I collided with the ground, and my forearm skidded along the pavement. Luckily, YouTube also taught me how to take care of my wounds: Pour hydrogen peroxide on a wooly cotton ball and dab it on my gory, surging wounds. I never put bandages on my wounds because I always thought, “I’m too tough. I don’t need them.”

I learned many of my childhood activities alone because while my mother was constantly working, I also didn’t have a father to teach me anything. He was completely and utterly out of the picture. He had never been around and had left us before I had been born. When my mother moved away, all the photos of him were lost. The closest source I have to him is myself.

My mother said I look just like him, so looking in the mirror is my gateway to and from my sorrow.

The day my chain broke was the day that it really hit me. If he had been there, he could have shown me how to fix the chain. But I never had a dad to show me how to fix my bike chain, how to catch a baseball, or how to throw a football. I was tired of ruminating on what my father might look like and creating notions of what my life would be like with him in it. I learned to throw a baseball by throwing a faintly dirty tennis ball I had found at the park against a jagged brick wall. It was the only way I could throw the ball at “someone,” and it would come back.

I didn’t have any friends in my neighborhood — only at school. The wall filled that void. I started going to Peace Neighborhood Center when I was six years old. It was there — sitting on a foldable wooden table inside the cafeteria with my mom — that I first heard about my dream school; it was a private institution.

On the morning of my “in-school” visit, my mom dropped me off in her Jeep that we called “Turtle.” It was green and older, and it was ours. Later, I told her how amazing my day had been. I knew that my dream school cost a lot to go, and I didn’t know how we would pay for it.

Months passed, and sometime during the summer, my mom and I were driving down the street. I had been thinking about the school, so I said to her, “Wouldn’t it be amazing if I could go Emerson?”

I reached over the seat towards my mother while keeping my seatbelt buckled, and I began to give her a monumental amount of kisses. With all of the incoming kisses, she responded to me with, “Of course. I always want the best for you, Sebastian.”

We sang on our car ride back home until we lost our voices. I remember singing “Treasure” by Bruno Mars with my mother singing right alongside me. I had never been so grateful.

When I started at my new school, I noticed the drop-off cars: Maseratis, Porsches, Mercedes. It was my first time being around cars like these. I asked several of my peers what their parents’ occupations were, and their responses were always the same: doctor, lawyer, entrepreneur. It was then — when I was nine years old and in the fourth grade — that I realized how I could repay my mother’s constant sacrifices and lost opportunities.

My mother had me at a very young age. She was 21 and never got the chance to travel the world or finish her degree in computer science. Working night and day and still coming home late nights to study, funds became harder, especially as she had to pay for my dream school.

My passion to go to Harvard University began in fourth grade. I knew I had to make the same efforts my mother made for me, and I had to try and go to a prestigious university and earn my degree in neuroscience, so I could be in a position to repay all of my mother’s lost opportunities.