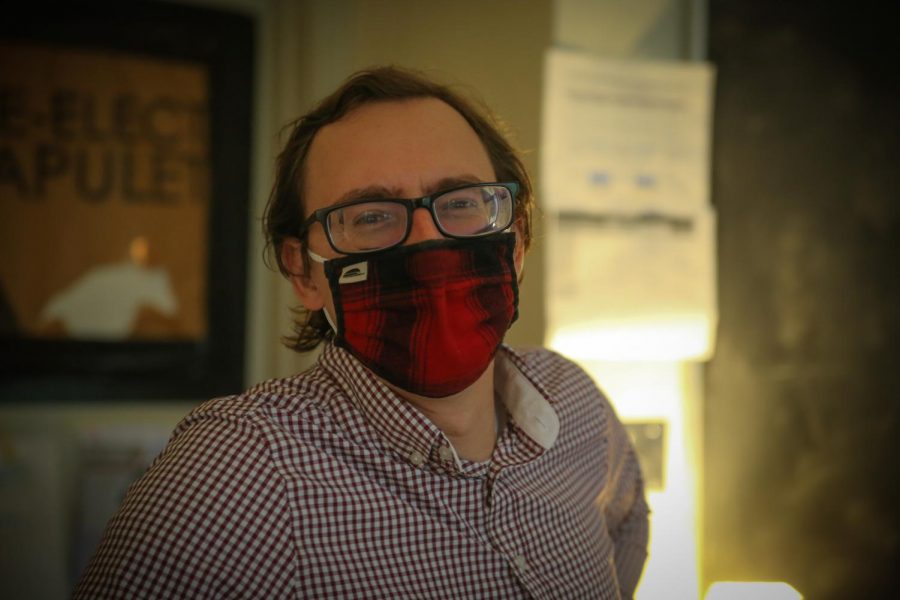 Michael Vial, now a CHS English teacher, stepped into the street carrying only his guitar and his CDs when he got hit.

Next thing he knew he was on the ground, surrounded by shattered glass. He didn’t realize he had been hit by a car until he saw the wheel a few feet from his head. It was 2016, and Vial had been on his way to play a gig at the Ark, a music venue in Ann Arbor.

“When you get hit by a car you feel a major rush of adrenaline,” Vial said. “You feel like you’re the Black Panther or Superman. I thought, ‘I’m gonna go play that gig anyways.’ And then I tried to walk.”

Vial has been writing songs since he was 17 years old. While in college at Western Michigan University, he took voice lessons and guitar lessons.

“You start writing songs [because] you’re dating somebody, and then you break up,” Vial said. “You don’t know how to feel about it and you need something that explains how you feel. Once that stupid experience happens, there’s no going back for some of us. We just have to be artists.”

In sixth grade, Vial’s mother encouraged him to take piano lessons. He didn’t practice much, and his mom let him quit after a couple years.

“I remember being in sixth grade, like, ‘I don’t want to play this giant box that looks like an elephant,’” Vial said. “But I felt like something was missing in my life.”

While in eighth grade, Vial was visiting family in Canada when he met up with a distant cousin who had a Fender Stratocaster: a sleek, brown electric guitar. Vial was getting into grunge music like Pearl Jam and Nirvana at the time. He decided to get up early one morning and while no one was looking, he took his cousin’s guitar out of its box.

When Vial got home from that trip, his dad gave him his first guitar. By the time he was at Western Michigan, Vial was already a great guitar player, but he got into teaching by chance. He loved music, but he didn’t realize that his love for songwriting translated to a love of literature.

During college, Vial was asked to be in an Honors English program. He hadn’t considered himself particularly interested in the subject, but one experience at the end of his senior year made him change his mind. Vial’s British Literature class was preparing for final exams and there were two groups competing for extra credit points. The groups each had to pick a group leader and Vial’s whole group picked him. The experience struck him.

“I guess that was the start of the seed,” Vial said. “I didn’t see myself as a reader. I was a guitar with a kid attached to it all day.”

Vial had figured out ways to take music classes senior year and not take a math class. He would sit in a closet and play guitar for an hour and a half every day and leave the door open to try to impress girls. He was walking by the teaching college holding two rejection sheets from schools of music when he put the pieces together.

Vial was inspired by teachers that were role models to him, including his cross-country coach. Vial got his first teaching job when he was 22 years old at Holly High School in Holly, Michigan. He worked there for eight years but he struggled with anxiety. On his way to the job interview he had to stop at a shoe store because he forgot his shoes at college

“I stopped at the nearest Payless in Dearborn Heights, ran my credit card, grabbed the first shoes off the rack and put them on in the car—Then I got the job,” Vial said.

He knew he had the energy and the relationship-building aspect of teaching down, but found it difficult to stay on top of grading and lesson planning. When Vial knew he was behind on work he wouldn’t be able to start his work. He couldn’t deal with the feeling of being behind, so he would procrastinate more to stay away from that feeling.

A lot of Vial’s 20s were rough for this reason. He felt like he couldn’t keep up and would blame his job for giving him too much work.

It was his music career that taught him how to be organized. Organizing his performance schedule and paying the bills helped him get over his anxiety, but his path wasn’t a straight line.

“It’s a process of checking in and getting a little better, [and] screwing up again— it really does come down to knowing oneself,” Vial said.

After Vial quit his first teaching job, he became a full time musician. He released his own records of James Taylor-inspired music and he would travel around the country to play gigs. He often played live shows in bars; he would be the background singer in the corner once a month for seven or eight years. No one would be paying much attention, but he didn’t have the luxury of only doing the gigs he wanted. These shows would typically last between three or four hours. He eventually had 600 songs memorized.

“I’m like a pickpocket,” Vial said. “This person wants to hear country [music] and I hate country, but I know enough. I’m gonna get them talking like, ‘Oh do you like Keith Urban?’ You’re trying to get their money out of their pocket into your tip jar.”

Vial loved writing music and releasing his own records, but eventually he had enough. He realized that he was playing the same venues over and over again without making progress. This is something that even the most successful musicians experience.

“You’re circling the drain,” Vial said. “There was a point where I was like, ‘I love playing the Ark, but I’m gonna play the Ark again, I’m gonna play it again and again.’ I didn’t want to play at bars anymore. I didn’t want to be the background singer in the corner. Teaching isn’t like that. I was starting to miss the energy of a room.”

Vial eventually returned to teaching. He realized that his perspective on teaching in his 30s was very different. He knew that if he was going to return to teaching, he had to be all in. This time he wanted to be a voice for change within education. Specifically, he wanted to encourage more diversity in teaching since teaching can be inaccessible to people who have student debt. He supports non profit organizations that help pay off student loans for people who want to become teachers, but come from lower income families.

“It is really hard to walk away with student loan debt and then start [teaching] when you could do something else,” Vial said.

“The pandemic has revealed to us the importance of critical thinking, working together and compromising, but not compromising on everything,” Vial said. “Reading is a part of that story for us as humans. If I can make [reading] a part of the classroom more, and more people are walking away from [a book] discussion feeling like they have the maturity to engage, even if they’re not an avid reader, they’re still feeling more proficient in seeing the themes and that makes me so excited, like playing the right chord at the right time.”

Vial still plays gigs at the Ark and other places around Ann Arbor, but he doesn’t have to rely on music for his income. He’s ended up at Community and he feels like he has the best of both worlds.

“Every day when I leave, I just can’t believe I’m here,” Vial said.