What Does Feminism Mean to You? 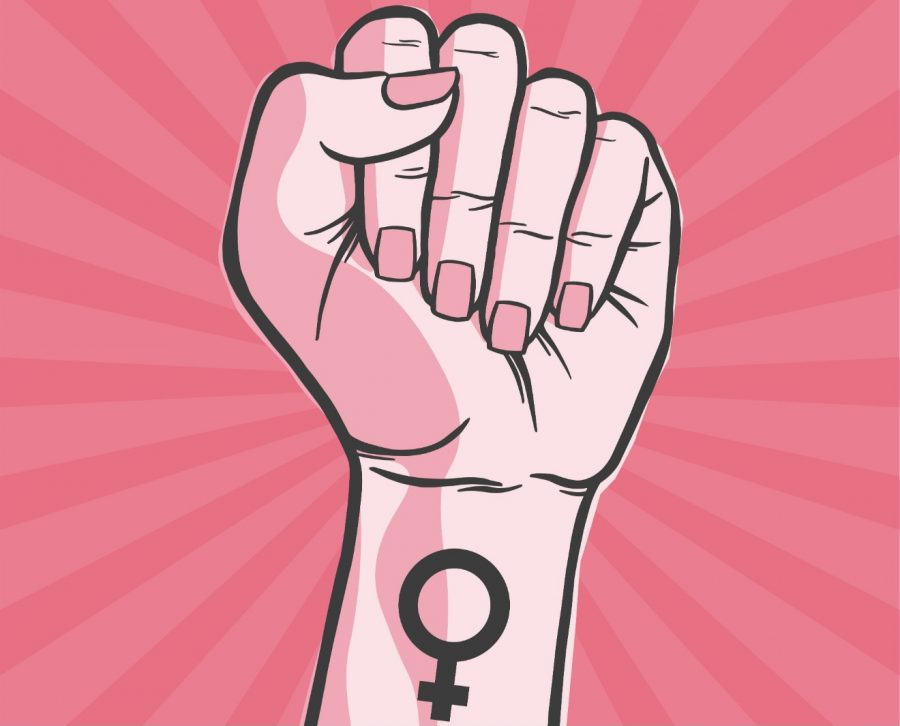 Sarah Hechler, Community High School history teacher and forum leader, was raised to believe that she could do anything. She played on a co-ed soccer team, and was always encouraged to take the extra step with all of her endeavors.
“My parents modeled a really healthy self esteem and self worth,” Hechler said. “They always raised me to not to put up with being treated poorly by people.”
These early stages of Hechler’s life were when the concept of feminism was introduced. She didn’t let the boys on her soccer team put her down for being a girl. Their comments only made her want to beat them even more.
As she got older, Hechler was able to craft her own definition of feminism. Over the course of her lifetime, she has noticed how that definition has changed. The primary difference is that the the conversation around feminism has become much less binary, which she believes to be of signifcance.
“I think at its core, feminism is about equality and equal opportunities regardless of gender, ” Hechler said. “[I think it also includes] facing, with special consideration for the historical inequities that women have faced, either in the United States or worldwide. And so, for advocating for equal rights when it comes to citizenship and employment and voting. In things like career paths, women being encouraged just as much as anybody else. In terms of talents, being seen as fully human beings rather than being objectified or being two-dimensional exist purely for the benefit of other people instead of themselves.”
Hechler also associates feminism with gender equality issues that are still prevalent in our society. These include representation of women in politics, business and other places of power, as well as the wage gap. According to the Center for American Women in Politics, women held only 19.8% of 535 seats in the U.S. Congress in 2018. The Pew Research Center found that female workers earned 84% of what men were paid in 2020.
As a teacher, she believes that the reasons educators are so underpaid and undervalued is because they are a part of a predominantly female-field.
“Women have so much power,” Hechler said. “It’s wonderful to celebrate that and to support one another and look to incredible people out there in the world making a difference for justice and for fairness in society, including in the realm of feminism, and then the way that feminism intersects with all kinds of other social movements as well.”
Felicity Rosa-Davies, a CHS senior, sees feminism as a multi-layered concept.
“I think one thing I’ve noticed with feminism is that a lot of the divide lies between people who support it and people who don’t because people have such different definitions of it,” Rosa-Davies said. “Everyone’s going to have a slightly different perspective, even if they think it means the same thing. But for me, feminism is just being supportive.”
Ivy Prochasaka, a CHS junior, doesn’t have a solid definition of feminism. She thinks it’s up to each individual to interpret what feminism means to them.
“To me, feminism is just kind of doing whatever you want to do as long as you’re not like harming yourself or someone else,” Prochasaka said. “I feel like it’s just like being yourself and being unashamed of that and letting other women be themselves and not shaming them for that.”
Izzie Jacob, a CHS sophomore, doesn’t think that she fits into the mainstream feminist movement. Since it can be a majority white movement, she hasn’t always felt included. Nonetheless, it has still made her more confident while facing the sexism that can sometimes exist in communities of color.
“Feminism to me is a vehicle of empowerment because it has led me to be become more confident in who I am instead of giving in to society’s pressures on women,” Jacob said.
Vara Hopkins, a CHS freshman, believes that feminism has a multitude of meanings.
“Feminism means women empowerment and girls support girls,” Hopkins said. “But not even just, it’s supporting everyone in general, no matter what they’re about.”
Hopkins doesn’t believe that feminism just includes girls, either. She also doesn’t appreciate the misconception that feminists hate men and think they’re better than them.
“That’s not what we’re saying,” Hopkins said. “What we’re saying is that we’re not gonna degrade people based on how they are, who they are [and] what they look like, and I think that’s super important.”