Businesses During the Holidays 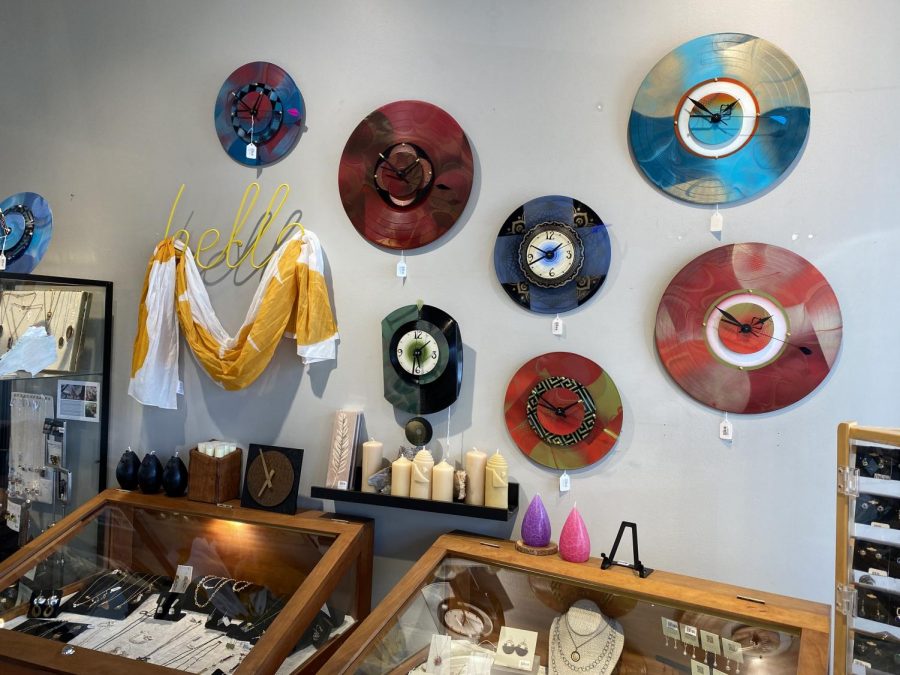 A display at 16 Hands in Kerrytown.

The holiday season draws customers to smaller businesses in search of the perfect gift, but this surge in customers—although a major income draw—can create issues for already short-staffed businesses. Labor shortages nationwide have left millions of jobs available and countless positions unoccupied. Michigan Governor Gretchen Whitmer dispensed $2.5 million to address labor shortages statewide in late November, but the issue continues to affect local businesses on varying scales.
“[We’ve had to] try not to let the boxes pile up too high,” said Rick Wedel, the manager of 16 Hands in Kerrytown. The store, specializing in artisan-made goods, showcases artists from across the world, local to international.
Wedel compares the uptick in traffic to that drawn in by the Art Fair, when 16 Hands was located on Main St., in downtown Ann Arbor.
“We were kind of in the middle of the Art Fair, that was a whole week of really intense crowds, and sales and things like that,” Wedel said. “Now that we’re in Kerrytown it’s mainly the holiday season.”
To meet demand upticks and keep things moving smoothly, it takes more than first meets the eye.
“[There’s a lot] behind the scenes, but then we also have staffing on the sales floor, so it’s been kind of tough, but we’ve hired a few people and it’s going well,” Wedel said.
The store currently employs three full-time staff members, and two part-time workers, but Wedel would like to have a few additional part-time employees to help cover shifts during busier times.
Like many other small businesses in the area, 16 Hands offers seasonal positions. The store needs more staffing support during the holidays and through January (when they take inventory, a fairly time intensive process that requires the shop to close for several days). During the active holiday season these employees mainly take to the sales floor, giving recommendations and helping customers as needed.
“Lots of gift wrapping,” Wedel said. “So people become experts in gift-wrapping in one season here.”
Despite various staffing challenges, times were tougher for the store at this time last year, when Kerrytown management had placed restrictions on store capacity in an effort to stop the spread of COVID-19. Although Wedel had no quarrel with the restrictions, it required yet another staff member to enforce the regulations.
“That just wasn’t always possible,” Wedel said. “You know, we were trying to kind of juggle that.”
Now these restrictions have been lifted, allowing 16 Hands more staffing flexibility and increasing their consumer traffic.
16 Hands hasn’t been the only business facing challenges. Sparrow Market, also located in Kerrytown, experienced some short staffing earlier in the school year, with students returning to school and many customers returning to in-person shopping it became much busier.
“We got busier, and so we needed more staff to compensate for that,” said Ivy Prochaska, an employee at Sparrow Market and CHS junior.
However, the business is now on much better footing, staffing wise, and is prepared for the coming holiday season, during which the market gets much busier. The meat counter and produce section get especially busy during the holiday season, with customer’s doing their last-minute shopping.
“A lot of people buying their turkeys, ordering their turkeys and just meat,” Prochaska remarked on the increase in customers in the week preceding Thanksgiving.
However, other businesses haven’t felt the effects of the labor shortage at all. Catching Fireflies, another local business specializing in eclectic gifts, hasn’t faced any staffing problems at its Ann Arbor location.
“It hasn’t overly impacted this location,” said Maria Melo, a head employee. Melo points out that their other two locations are still struggling, and that it has typically been even tougher staffing wise. The main reason for her success this year is the loyalty of her employees, as she hasn’t received any new applicants since July.
“Great people have been with me for three years, another person even longer than that,” Melo said. “I mean, they stay within your walls.” Her positive relationships with her employees give her an advantage over bigger businesses, and have helped prevent the store from experiencing crippling staffing shortages.
Although the store gets busier around holidays, the winter season doesn’t see the greatest increase in customers.
“Summer is our Christmas,” Melo said.

As a business that relies heavily on downtown foot traffic, the good weather in the summer months brings in the most customers. As such, the past few months haven’t created the same scramble for employees that many other businesses are experiencing.