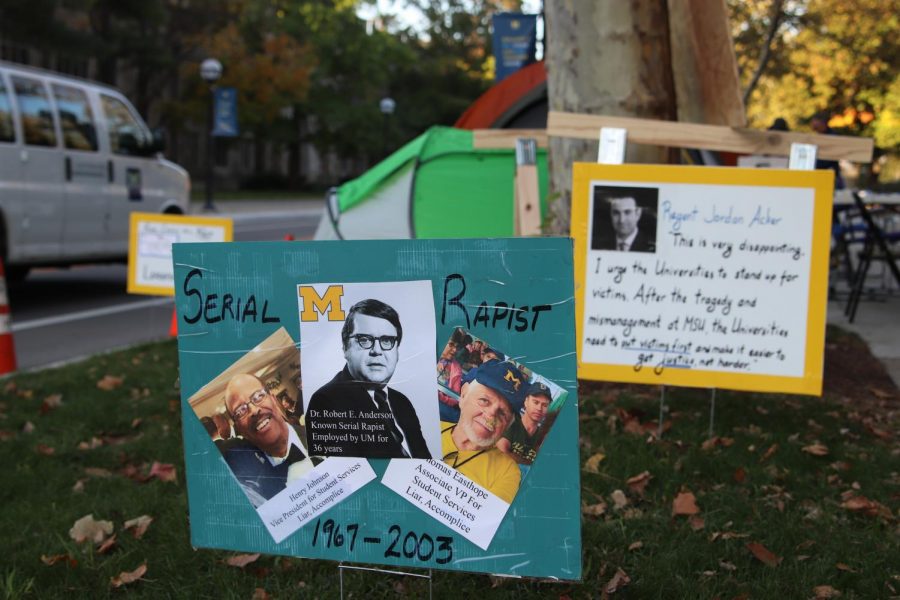 Outside of the University of Michigan presidential mansion stands a board with hundreds of signatures all pledging their support for the same thing: a safer campus. Jon Vaughn, a former U of M football player and a survivor of former UM athletic doctor Dr. Robert Anderson’s sexual abuse, is camping outside of the 22-room house for the foreseeable future to demand a change in policies to protect students and staff from sexual assault.
“I’m not John Doe,” he says, referring to his designation in the class action suit documentation against the university. “I’m Jon Vaughn,” he said. “And you need to know who I am. Especially since your university, and [U of M President Mark Schlissel] and your board of regents are mistreating us. Maybe you should know the man you are mistreating.”
Vaughn learned about the questions and allegations surrounding Dr. Anderson two weeks after his 50th birthday, but, before then, never questioned the regular prostate exams given to him by Anderson when he was in his late teens.
“At 18, I didn’t even know what a prostate was,” Vaughn said. “I just knew that my mother was recovering from breast cancer. I didn’t want cancer, and I was afraid of cancer. Terrified. But it was difficult to then look back. The first time I had panic attacks was when I was 50 years old. Because the foundation of most of what, as a man and a father, I learned here in how I live my daily life, and to find out that that entire foundation was built on in manipulation and rape and cover-up, it was hard to take, it was really hard to take. I think I’m not through the process. Sexual assault [and] rape is something you never get over. You just get through. And I’m in the process of just getting through.”
Before arriving to protest, Vaughn prepared by eating more protein, meditating, and studying past successful protests on campus. Because his football team practiced in worse weather, the conditions weren’t a shock to Vaughn.

Chuck Christian, another former U of M football player and an Anderson survivor, drove 15 hours straight from Boston to join Vaughn, despite suffering from stage-four prostate cancer. Christian learned he had cancer five and a half years ago, after avoiding the exam due to his past trauma. 12 years before learning he had cancer, he tried to get an exam but couldn’t.
“The doctor said ‘I want to do a digital exam on you’,” Christian said. “I didn’t know what a digital exam was, I was thinking kinda like a CD, DVD, or something like that. And he said ‘no’ and put gloves on his hands and snapped them. I said ‘ohhh, hell no.’ I jumped up out of the chair and I said ‘no, you’re not gonna do that to me. That’s what Anderson did to me in college, and nobody’s ever going to do that to me again.”
But despite discomforts from the weather and health, Vaughn, Christian, and their supporters are determined to provide support and safety for current students.
“This is the school we also love,” Vaughn said. “We can’t change what happened to us. But we can change what’s happening to you and for you. We stand with you, we hear you, we definitely hear you.”
Students stopping to sign a petition and attend rallies have shared their stories of safety on campus. One that particularly struck Vaughn was a student who shared how she spends more time thinking about when she is going to get raped than what she wants to major in.
“This is where dreams are created for what [someone] wants to do when [they] grow up, so to speak, so it’s kind of a tragedy that a student has to feel that way,” Vaughn said. “Especially at the probable number one public learning institution in the world. That’s a sad duality.”
Vaughn, Christian, and other Anderson survivors have also seen support from assault victims at “rival” schools, including Ohio State University and Michigan State University.
“They call us rivals,” Christian said. “We’re rivals, we hate each other. No. We don’t hate each other. We don’t. We just go to different schools, but we don’t hate each other and when it comes to something real, like fighting something like this, then we come together because we hate rape. We hate the abuse of our young people. We hate the abuse that’s taking place. That’s what we hate. We don’t hate Ohio State. That’s all the hate that they use to sell tickets to the football game. We don’t hate anybody but people like Anderson, who hurt our young people and who use their doctor position to destroy young lives.“
Vaughn says he will know he is successful in his efforts once there is a change in the U of M administration and students can walk anywhere on campus safely.
“This has become the epicenter of sexual abuse, and rape in colleges, and everybody follows Michigan, from an institutional standpoint,” Vaughn said. “So if we kill it here, we kill it everywhere else.“