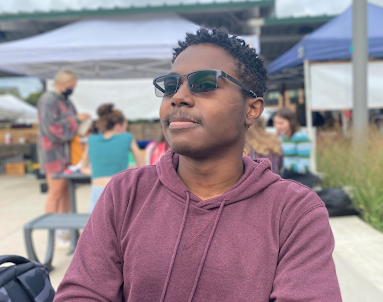 “In the beginning of August, it was my dad’s birthday. He’s not a man who likes physical gifts. He prefers – and he really loves – music. My brother and I are musicians, so we thought, what is the song that we could play that he would really enjoy? We thought, Okay, Roy Hargrove, he’s a trumpeter, recently died a couple of years ago. We’re gonna play one of his songs. Now, I’m a multi-instrumentalist, so I know how to play the trumpet and the drums. So I played the drum part and the trumpet part, because Hargrove is a trumpeter, and then my brother played the baseline with this tuba. We did some piano, and we made a whole video on it. And I remember that morning of his birthday, because we got him a new Apple TV, you know. So we got him a new Apple TV, and we sat down, and then he watched the video, and it made me really feel special,. Wwhen my dad, he’s not much of a crier,. Bbut it brought him to tears, seeing the video because I spent like two whole days just out there, on my desk, editing this in Logic and Final Cut Pro. It brought him to tears. He had to wipe his eyes, and he’s like ‘this is the best thing you could have ever given me. ’ So I think that was probably the most special thing that’s ever happened between me and my father.”