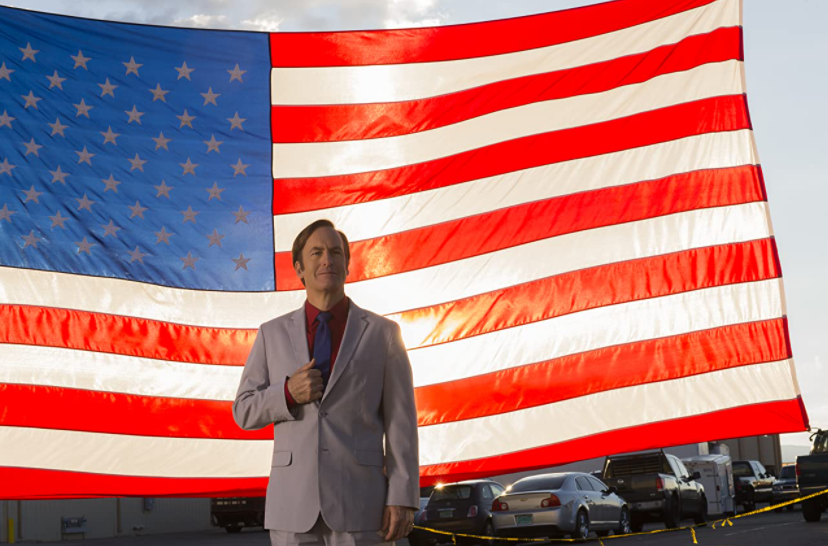 The drama television series “Better Call Saul” — a prequel and spin-off to the critically acclaimed crime-drama “Breaking Bad” — brilliantly portrays the downfall of Jimmy McGill, a down-on-his-luck lawyer who would one day be known as Saul Goodman.

Created and written by Vince Gilligan and Peter Gould, “Better Call Saul” follows Jimmy McGill and his descent to becoming the underhanded and lying persona of Saul Goodman. McGill begins the series as a nice, hard-working lawyer, but soon he begins to portray the caricature that others see him — a sleazy, quick-witted criminal lawyer. This is because many of his closest partners still see him as “Slippin’ Jimmy,” a name he was called when he used to pull scams to make money years ago.

“Better Call Saul” features two main storylines; Jimmy McGill’s life and the criminal world of Albuquerque and how Jimmy is slowly pulled deeper and deeper. These two main storylines feature many great performances and characters, particularly Bob Odenkirk as Jimmy McGill; through his performance, Odenkirk injects humor and charisma into the series. His performance and character perfectly matches with the formal and caring law partner of Jimmy McGill, Kim Wexler (portrayed by Rhea Seehorn). Alongside them is Patrick Fabian as Howard Hamlin, the legal competitor to Jimmy, and Michael McKean as Jimmy’s older brother, Charles McGill.

The criminal underground storyline of “Better Call Saul” features several reprising performances like Giancarlo Esposito as the criminal kingpin, Gus Fring, and Jonathan Banks as the cool-headed and professional Mike Ehrmantraut. Every scene with Esposito adds suspense and tension as the audience doesn’t know what to expect from him and Banks’ performance as the calm, professional Ehrmantraut perfectly clashes with Jimmy McGill’s humor and charm.

This storyline also features a great performance by Michael Mando who plays Ignacio “Nacho” Varga — a man who desperately wants to dig out from the criminal underground but is pushed back by the appearance of the charismatic but cold-hearted, Lalo Salamanca (portrayed by Tony Dalton).

Alongside its great performances, “Better Call Saul” is also a masterpiece in writing. Like its predecessor, “Breaking Bad,” the audience is kept on the edge of their seat as you don’t know what’s going to happen next and they watch as the plot slowly unravels. Paired with this is great cinematography which often shows the little details and gives small nuances to what may happen next.

Overall, “Better Call Saul” is well worth the watch. Between the performances, the craftsmanship and the storytelling, the series has everything that makes a great TV show and an amazing prequel worthy to be alongside “Breaking Bad.”