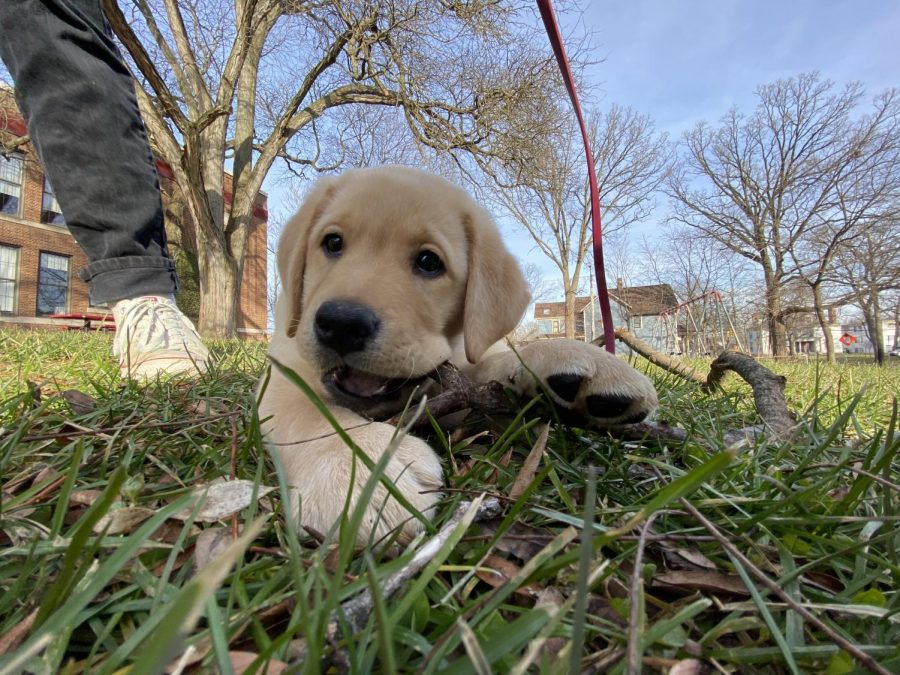 Olivia Wylie, a Spanish teacher commonly known as “Profe” at Community High School, has fostered multiple service puppies in the past and this year she’s doing it again. She got her new foster puppy, Goose, on Friday, Dec. 10. Goose was born on Oct. 12 and is now eight weeks old. He’s a labrador, like all the other puppies Wylie has fostered in the past.

The puppy Wylie has gotten this year was sponsored, along with the rest of his litter, by the American Veteran Society, so likely he’ll work for a veteran in the future. “The things that he’ll be trained to do if he’s working with a veteran with PTSD will be to help them calm down when they start to have feelings of anxiety” Wylie said. “And they will train him how to sense when the anxiety is coming.”

Wylie believes these dogs bring so much good to the world. “These dogs give people a lot of personal freedom,” Wylie said. “And that’s important. They change someone’s life. People that have service dogs can now go into malls, the dog can reach up and open the door for them. He’ll learn how to take clothes out of the washing machine and put them in the dryer and press the button. I can’t even get my nephew to do that when he’s at my house as a guest. There’s a lot of stuff that he’s going to be able to do.”

Goose will be going to a disabled veteran. Wylie believes this program has the ability to influence veterans’ lives in a positive way. “Disabled people can live in the world without fear,” Wylie said. “These dogs give people a lot of personal freedom. And that’s important. They have served our country, these veterans. We deserve to give them our best service too. I work at the VA hospital, I do bingo on Sunday nights with the veterans. So when I see a lot of the young guys have come back from Afghanistan or Iraq and they’re in wheelchairs, It’s heartbreaking. So it makes my decision really easy.”

Wylie will likely foster the dog for around a year, at which point he will take a test to see whether he lives up to the high standards of Paws for a Cause. “Only four out of every 10 dogs make it,” Wylie said. “And they can be a really good dog and still not make it. This dog, Shiloh, was trained to do arson detection. And they said he hit the mark every time, never missed it. But he just went on strike. He was like, ‘Nah, I’m not doing that anymore.’ You can offer me my favorite toy or praise. I’m not going back in there and smelling those chemical solvents, I don’t like it.”

Wylie is optimistic that her new puppy will make the program. “He gets everything quick. He’s already got ‘sit’ and I’ve only had him for three days. He’s already not pooping in the house at all. He just goes right to the door when he knows he has to go poopoo. He’s really good with kids. He’s good with people, a very social animal.”

Although the majority of dogs don’t pass the program, they still have a positive impact. These dogs are used as pets or given to people in need, albeit not through the Paws for a Cause program.

“My brother Dan has profound hearing loss,” says Wylie “So Grady went to him and it changed his life. Because he’s telling me ‘I can’t hear the doorbell, I can’t hear.’ And then Dewey, my niece raised Dewey, he became a drug detection dog. He’s in the Philippines now at an airport working for drug interdiction, those kinds of programs. These dogs are really, really smart dogs. This one hopefully will make the program. That’s what our goal is.”

Some Community parents have expressed concern over having a dog in the classroom. Will Goose have a positive impact on CHS and the Spanish classroom? Or will he distract students from doing their work, as some parents believe.

“I think it’s a legitimate concern,” Wylie said. “But the students are still working even though they see Goose and they look at him and stuff. But these are people that are going to be, in 10 months or less, at universities. If you can’t handle a little distraction at this point, there’s a problem. You have to learn how to stay focused and on task. I have distractions all day long. I still try to stay on task and that’s something that I try to teach my students, despite all of the issues that we’re going to face in life, we still have to keep moving, keep calm and keep going.”

Wylie also stresses the positive impacts of the classroom environment on the puppy.
“I have to expose him to music in my classes, I have to expose him to kids talking, kids working on activities. Where is he now?” Wylie said, looking around to find Goose asleep beneath a student’s desk. “You’d never know. He’s not even fazed, he’s sleeping. Kids are going to get used to it, as you can see, they’re all working now. Nobody’s being distracted by the dog. He’ll be just like another student in the class.”

After fostering a dog for so long, it’s extremely hard to give them away.
“Oh, I’m a sobbing mess. I am a sobbing mess,” Wylie said about handing the dogs off to trainers. “I had to pull over and I had the windshield wipers going, I was sobbing so badly. And my sister Marie said, ‘Oh my God, you’re a hot mess.’ It’s just so hard to let go of them. I tell them no matter what if he doesn’t make it you call me. I’ll come get him.”

Even with all the obstacles and heartbreak she experiences in the process, Olivia Wylie still believes fostering puppies is worth it. “When you meet somebody who needs a service dog, and you hand the leash over, it just brings such sunshine. When I see vets with their dogs, I know that their lives are different.”