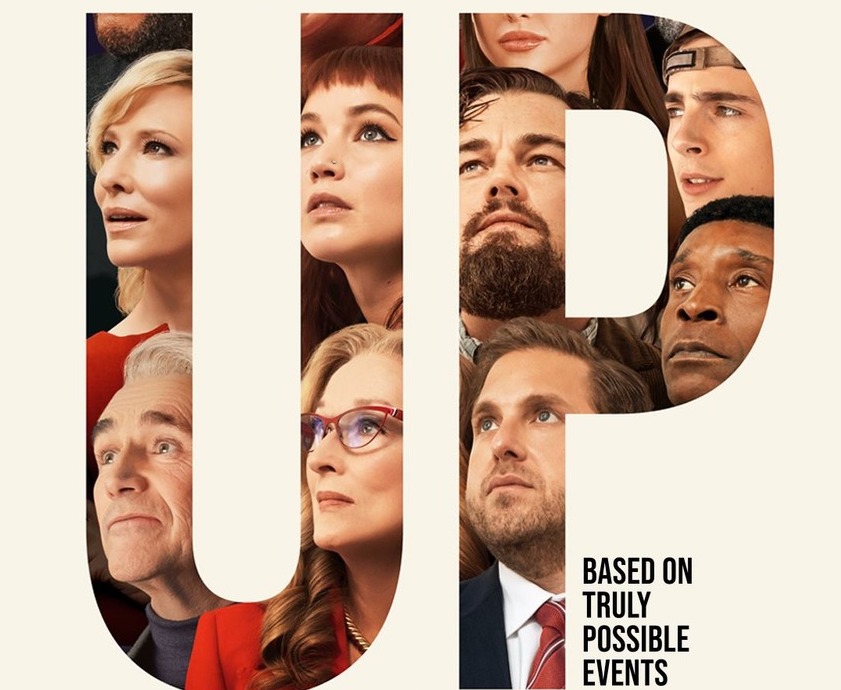 On Dec. 24th, 2021, Netflix released “Don’t Look Up” in a comical yet painfully accurate parallel to climate change ruining our planet. This two and half hour movie features the effects of politics, the sway of billionaires and how talk shows distort the truth.
It begins with two astronomers, a PDh candidate Kate Dibiasky (Jennifer Lawrence) and Dr. Randall Mindy (Leonardo DeCapirio), discovering a large comet, Comet Dibiasky, hurtling towards Earth. This comet could not be stopped and there was a 100% possibility of it destroying the entire planet within six months.
Naturally, their first reactions were to go to the President Janie Orlean (Meryl Streep), but they were told it wasn’t a big enough threat to warrant any immediate actions. With the help of Dr. Teddy Oglethorpe (Rob Morgan), Dibiasky and Dr. Mindy attempt to go on a big news site to tell the public of the severity of Comet Dibiasky. The two new anchors, Brie Eventree (Cate Blanchett) and Jack Bremmer (Tyler Perry), try to keep their show light hearted and full of humor despite the severity of Comet Dibiasky. Dibiasky is quickly seen as a joke due to bad media presence and their life’s work was written off.
Dr. Mindy, with the help of the news anchor, Brie Eventree, has a quick rise to fame as the world sees him as the ‘World’s Sexiest Scientist’ while Comet Dibiasky becomes something of the past. While he tries his best to promote awareness of the comet, he is swept up by the fame. However, Dibiasky, having been pushed out of the picture, tries her hardest to make people understand.
When the comet is finally addressed by President Orlean, a new character, Peter Isherwell (Mark Rylance), steps in and decides that all efforts to stop the comet are fruitless. Isherwell, the richest man in the entire world, wants to try to break the comet into smaller pieces based on the fact that the meteor is full of usable materials that are slowly being used up on the planet.
This idea splits the world in two.
There are two sides to the story: the side that wants Comet Dibiasky destroyed completely to stop it from destroying the world and the side that supports the jobs and minerals that the comet will provide.
The movie provides a heartbreaking parallel to the world that we are currently living in. It provides a heightened sense of reality and how horrible climate change is at the moment.