Unmuted: We Deserve More Than Thoughts and Prayers 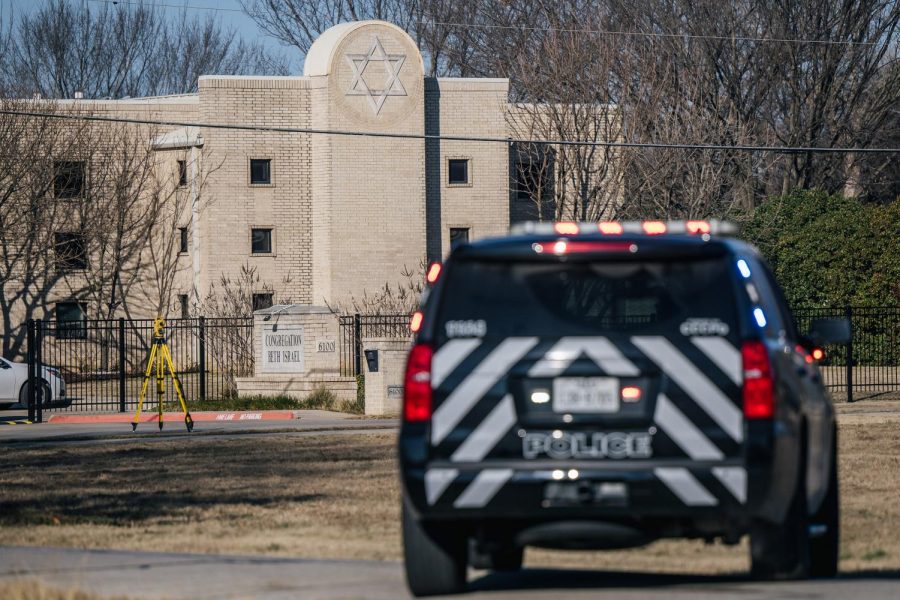 A law enforcement vehicle sits near the Congregation Beth Israel synagogue on Jan. 16, 2022, in Colleyville, Texas.

Since the pandemic, it has been hard for my family to get to synagogue for Shabbat services on Friday evenings or Saturday mornings. We still try to attend virtually during the high holidays, as well as other Jewish holidays, but I sometimes miss getting dressed up and listening to the cantor sing, as I flip through the pages of my Etz Hayim prayer book, trying to practice my rudimentary Hebrew.

Since I was a child just starting out in Hebrew school, my family has attended Beth Israel Congregation, right here in Ann Arbor. Beth Israel is a common name for synagogues. As it happens, it is also the name of the congregation outside Dallas-Fort-Worth, TX, where, on Saturday, Jan. 14, a gunman stormed Shabbat services, and held the rabbi and congregants hostage for 11 hours.

They were eventually able to escape, when Rabbi Cytron-Walker threw a chair at the gunman, giving congregants time to rush to the nearest exit. His act, though bold, wasn’t just blind improvisation. Since the recent rise of threats and attacks against Jewish people across the nation — and the world — Cytron-Walker and his congregation had participated in numerous security courses with local law enforcement, to help plan for these kinds of situations.

Although this sort of crime is not exactly normal, it does feel familiar.

This latest incident serves as yet another reminder of the precariousness of Jewish life in America, and that antisemitism is still thriving, both here and abroad. Incidents of antisemitism are again grabbing headlines. For example, in 2017, an alt-right “Unite the Right” rally in Charlottesville, Virginia, hundreds of people gave Nazi salutes, waved flags with swastikas emblazoned on them, and shouted “Seig Heil” and “Jews will not replace us!”  According to a 2018 study, at least 4.2 million antisemitic tweets were shared or re-shared on Twitter over a 12-month period. Bomb threats have been received at synagogues across the nation. And antisemitic incidents in the U.S. hit an all-time high in 2019.

The problem is getting worse. Although antisemitism has been an underlying issue for thousands of years, the Trump presidency, as well as a fresh Israeli-Palestinian conflict has emboldened antisemites and made our community less safe. After the Holocaust, a lot of us believed we were born into an era where antisemitism would never be allowed to flourish again. Incidents such as the one in Texas, along with the terrorist incident in Pittsburgh and bomb threats elsewhere, show that, if antisemitism is given a platform and a voice, it can flourish and remain a threat to Jewish people across the world. The success of a society can be measured by the absence of discrimination, not just against Jewish people, but against any and all minorities. Problems like this fester when there is no action against them.

Communities can fight this if they have a will to do so. It takes work to become more active in recognizing the diversity that makes a community vibrant. A good first step is for community governments to condemn hate where they find it. I applaud the Ann Arbor City Council for recently approving a resolution condemning anti-semitism. But more can be done.  Community members need to educate themselves and others. Knowledge and appreciation of each other’s humanity are, above all, the keys to stamping out hate. We must spend the calories it takes to spread awareness — being passive won’t create change.