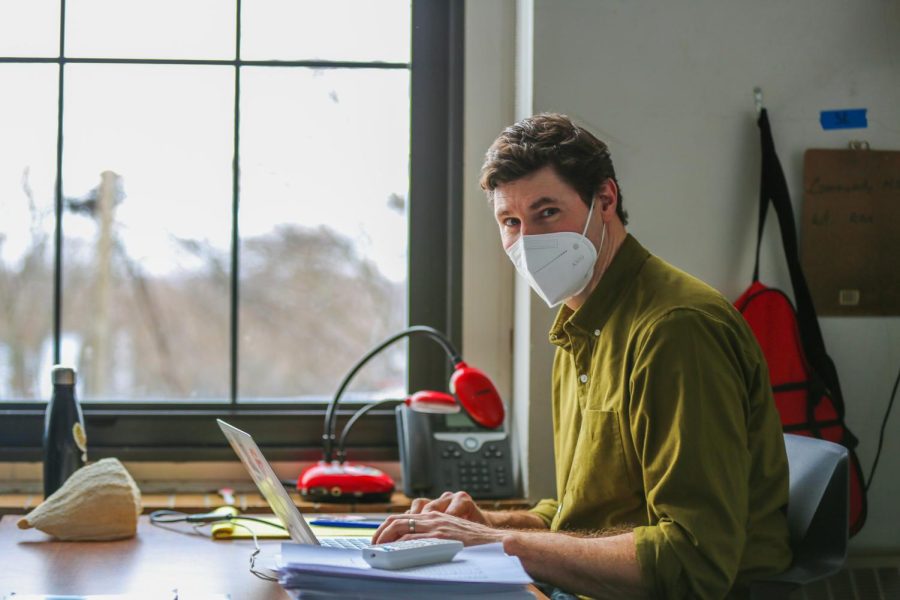 As Sean Eldon pulled flowers from the ground alongside the Tracy Anderson forum, he didn’t realize he had made a mistake.

“[Anderson] set up this thing where we went and did some gardening at a person’s house locally,” Eldon said. “I didn’t know plants very well and I ended up pulling out all of these woman’s perennial plants instead of the weeds, and then we took her rakes and shovels back with us by accident. I drove them back the next day, but it was a funny moment.”

Eldon was Anderson’s student teacher at the time and would attend and shadow all of her classes, including her forum. He appreciated the service work opportunities provided for forumettes, including the gardening day he was a part of.

“After the whole debacle, I thought how cool [it was] to be in a Community where people are happy to lend a hand and we can have these very human, silly experiences,” Eldon said.

Now, 20 years later, Eldon is joining the Community staff as an English teacher. For the past 18 years, despite a brief stint at Skyline, he has been at Huron High School as the English department chair and IB diploma literature and core teacher.

“Originally, when I was a student teacher, I would have wanted to work at Community,” Eldon said. “Then the first opening was at Huron. I got that job, and I was happy there. It’s a great school and I’ve had great colleagues there and have been able to take part in exciting programming, but this opening popped up at a moment where I was looking for something new and interesting.”

Eldon will be teaching American Literature and Film Literature, and taking over Matt Johnson’s forum. He has been able to learn from Johnson as he transitions to CHS.

“I’m excited to work with new teachers but it’s great to know that there’s some interesting, smart people who’ve walked on these paths before and are happy to use their expertise to help me,” Eldon said.

Eldon, who studied English Literature at Eastern Michigan University, loved his high school English classes and teachers and was drawn to teaching.

“For me, it was like, follow what you love,” Eldon said. “Do what your passion is. Teaching English was the only job I ever wanted.”

This semester at CHS, Eldon is able to combine his love for literature and movie-watching hobby in Film Literature. His philosophy for the class is “cinema interrupted” which he interprets as having a vocal dialogue during the movie, as opposed to a quiet theater space. He plans to show multiple films by one director so students can have a more-rounded experience of the director.

Eldon recommends students watch Studio Ghibli movies, and then dive into “weird stuff” such as Solaris, a 1972 Tarkovsky film .

“That [Solaris] was just one of those things that plays in front of you and you’re not even sure what it’s about sometimes,” Eldon said. “But it’s beautiful, moving and interesting. I don’t think a movie is always about sitting back and watching a story unfold and saying, ‘Oh, I get what happened’. That’s one way to view a movie. But another way to view a movie is it’s beautiful images. It’s an artistry of movement. And I like watching movies like that.”

Eldon is excited to come to CHS and believes he fits in well with the “Community mindset”.

“[What] I have always respected and appreciated Community is [the] sense of adventure,” Eldon said. “Everyone’s here because they believe in Community as not just a place but a state of mind. It’s all about developing relationships and being open minded.”

Eldon has settled into his new stairwell classroom (he’s excited about being safest in the case of fire) and has many questions for Community students. But, for now, he just says hi.

“In general, I guess I just say hello and happy to be here,” Eldon said. “Happy to listen.”