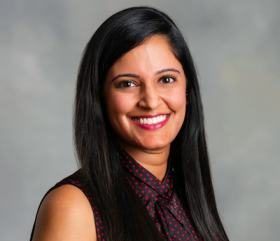 When Rani Upadhyay decided to go into interventional cardiology, certain people told her to reconsider because of a vital part of her personality: her voice.

Thankfully, she didn’t listen to them.

Upadhyay didn’t think much of cardiology or medicine in high school. Still, when she discovered her prominent interest in science during undergraduate school at the University of Illinois at Chicago, it led her down the path to medical school.

“I really liked the cardiology rotation because in cardiology every patient that you encounter is completely different so it’s not that you can just use an algorithm,” Upadhyay said.

Though passionate, she was often pushed away from the profession for various reasons. First, it would be an additional three to four years of extra training; there was an excessive amount of radiation to be exposed to, and being on call was essentially vital to the job.
Finally, she was often discouraged from going into the field because of potential “family concerns.” People warned her that she was sacrificing not being able to have a family or get married because she would never be home due to the taxing job.

“All of those things at this point I was in my early 20s. I wasn’t even married or looking to get married at that time. The comments weren’t from anybody I asked, ” Upadhyay said. “Oftentimes I would think, I know they wouldn’t say the same things if one of my male colleagues asked.”

Interventional cardiologists are often known for being louder and very assertive due to the high-stakes environment they are constantly in. Upadhyay, who is more soft-spoken, was told not to go into the field because of her voice.

“I had attendings who told me you shouldn’t do interventional fellowship because your voice is too soft,” Upadhyay said.

This comment undermined Upadhyay’s confidence though thankfully, she didn’t listen to them. Looking back, she knows that she wasn’t the one who needed to start speaking up more, but others needed to listen.

“Everybody has things they are trying to change, but I don’t think telling anybody to change themselves is very constructive,” Upadhyay said. “People need to stop telling women you’re not getting ‘such and such’ because you’re reserved, quiet, or not outgoing. I don’t think that’s a good enough answer or expectation.”

Upadhyay has also known women in the medical field who are more outspoken, and have been criticized simply for their personality and voice. In her fellowship, Upadhyay knew a general cardiologist who was quite direct. She would call people out if they weren’t listening, were wrong and overall had a more loud and assertive personality.

“They would go on the flip side and refer to her with bad names and say she’s too aggressive or she’s a b-word and they would never say that about the male colleagues,” Upadhyay said.

After finishing school and entering the field, Upadhyay continued facing instances of resistance simply because of her gender. In many environments, when she walks into the room, most people don’t assume she’s the doctor or cardiologist. Some mistake her for the nurse or other positions.

“I don’t get so offended, I tell them, ‘I’m the doctor.’ But once again, I know, if it was like what I’ve seen when my male colleagues walk in, like, they just assume that they’re the one in charge,” Upadhyay said.

Upadhyay even faced one situation where a patient didn’t want her to operate on him because of her gender.

Upadhyay has also received insensitive comments regarding her race while practicing. Racial microaggressions like ‘you speak great English’ and ‘where are you really from’ have often been thrown at her. Once, during an operation, Upadhyay experienced a patient who said that all of the Indian doctors’ in the room names were too long to pronounce, and they felt it was an act of disservice.

Though these types of situations can be frustrating and overwhelming, Upadhyay has learned along the way how to deal with them. She often likes to give patients the benefit of the doubt.

“In the end I’m there to take care of them. I can’t spend time feeling sorry for myself or being mad at them or that kind of thing. I try to put it out of my mind at the moment and keep providing the care that they deserve,” Upadhyay said.

Just being in her position is inspiring to the next generation. Upadhyay recognizes the power in representation and seeing yourself in someone else.

“A couple physician assistants older than me now in our practice have told me if they would’ve seen somebody like me when they were deciding to go to PA school, they would have choosen to go to medical school,” Upadhyay said.

Though being a woman in cardiology hasn’t been easy it’s been her passion and she constantly encourages young women to also go into the field.

“I would say that if that’s what you want to do and it makes you excited everyday, you should do it. You should know there are gonna be people that you ask or don’t ask for advice that are going to try to dissuade you and maybe sometimes for good reasons,” Upadhyay said. “Don’t be dissuaded by just one person that says, ‘you can’t do it’ for x,y and z reasons.”

People told Rani Upadhyay not to go into her profession because of her voice. Today, she is the only female cardiologist at her practice, and her position contiunes to inspire others to follow in her footsteps.

Her impact is loud and can be heard from miles away.