For Better or Worse?

Judith DeWoskin and Robbie Stapleton, former CHS teachers and forum leaders, have seen significant changes in the structure of forum throughout their time at the school. 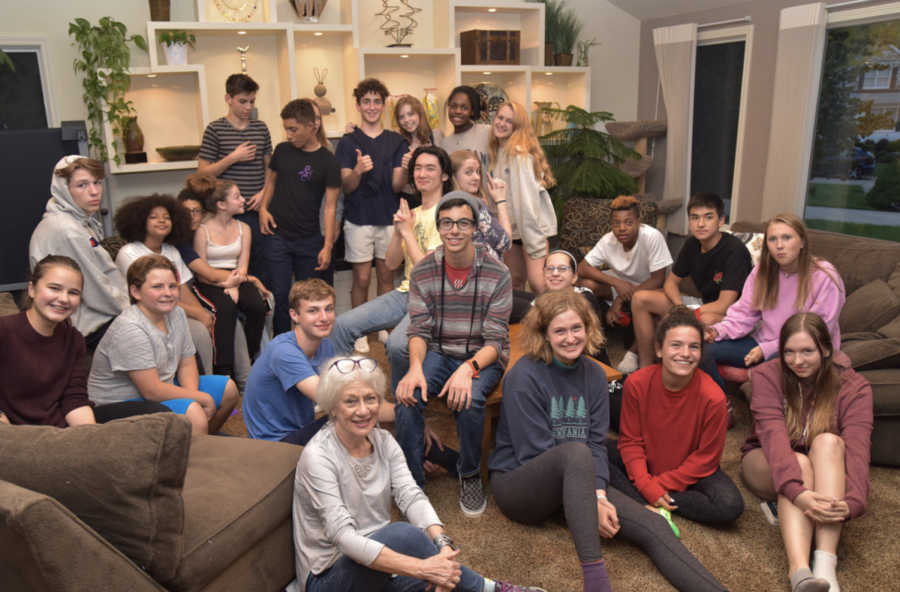 DeWoskin’s forum gathers for one of their forum trips. “Planning the food for all of those events for me was a lot of fun,” DeWoskin said. Photo Courtesy of Judith Dewoskin

Although forums at Community High School (CHS) have changed over the years, they remain an important part of the school. Former CHS personal fitness teacher Robbie Stapleton spent over 20 years making her forum feel like a family.

“I really loved everything I did at Community: all the classes, subjects and content that I taught,” Stapleton said. “Yet when someone says ‘What do you remember most?’ I have to say forum, because it really felt like family to me. Forum was a team: You go through stuff together and come out the other end. It’s a very special thing.”

When CHS first opened, kids would join forums largely based on the nature of that particular forum. During visits to middle schools around the district, CHS counselors used to bring forum descriptions written by the forum leader and members. As the culture changed a decade ago, they stopped bringing them.

For example, Stapleton’s forum was largely fairly athletic and sports-inclined kids, so her forum description usually included lots of physical activities and team-building exercises. Over time, these descriptions disappeared as students were no longer able to choose which forum they were placed into.

As CHS expanded, so did forum size. Originally, every staff member was a forum leader, so there were less kids per forum. During the 1980s, the administration changed the rules so that only teachers were allowed to be forum leaders, and the number of kids per forum increased significantly. Stapleton started her first year as a forum leader with only 15 students and ended her last year with 29.

According to Stapleton, the size increase made it more difficult for her to bond with forum members. Stapleton also had many students who were unable to switch out of her forum, because other forums were already at capacity.

Allowing kids to electively switch forums raised concerns that a mass of students would flock to one forum or students might switch for frivolous reasons.

Even with these apprehensions, there are benefits to choosing a forum based on your personality or interests, and having the ability to switch out of a forum that doesn’t suit your needs.

“I will argue this until the day I die,” Stapleton said. “Kids should

be able to choose their forums. Forum is the most important class we offer; we choose all of our other classes and we take pride in that. Why can’t you choose your forum? I think when you can do that, it [lets] kids know that we trust them to make good decisions.”

CHS operated under Stapleton’s mentality for a while, but as schools became less flexible, students were no longer allowed to choose their forums or easily switch out.

These structural changes inevitably forced students to interact with people they might not have met outside of forum.

Judith DeWoskin, former CHS English teacher, asked her forum students what they did on weekends together. She was met with bewildered faces as one student explained that forum members didn’t hang out outside of school.

“[My student] was informing me that this was a relationship that the kids had within the context of the school,” DeWoskin said. [For example,] you work with your colleagues and you appreciate them, you respect them and you admire them, but that doesn’t mean you go out to dinner or you invite them over to play Bananagrams or something.”

In recent years, the emphasis on forum has been diminished by the addition of lunch forums. When Stapleton and DeWoskin began teaching, there were fewer kids who had conflicts such as split enrollment at other schools or afterschool activities that interfered with the time after forum. These students were placed into the “Phantom” forum that met during the school day or less frequently. Over time, more and more forums would meet during lunch for at least one out of the two weekly blocks.

Both Stapleton and DeWoskin resisted lunch forum for many years, insisting that it diminished forum members’ relationships. The shortened forum lunch-time left implied that forum was no longer important enough to meet after school for a longer period of time.

“[Forum] is like hanging out with a bunch of second graders who really need to run around and bang their heads against the wall because they’re tired,” DeWoskin said. “It’s a way of debriefing and winding down, venting or laughing or just being stupid at the end of the day. One of the things I loved about forum is [that] kids were raw and honest. I don’t think you can get that in 20 minutes of lunch.”

After receiving many requests from her forum to switch one meeting a week to lunchtime, DeWoskin finally caved. She was forced to rush through forum bulletin which created an uptight environment and eliminated time for other forum activities or projects. Both DeWoskin and Stapleton have observed a deemphasis on forum since the addition of lunch forum because it significantly decreases the overall amount of time forum meets.

Over the years, there have been conversations among staff about whether or not forum should cease to exist in order to make more space for elective blocks. The majority of teachers, however, want to keep forum and continue to make it a meaningful time for students and teachers to connect.