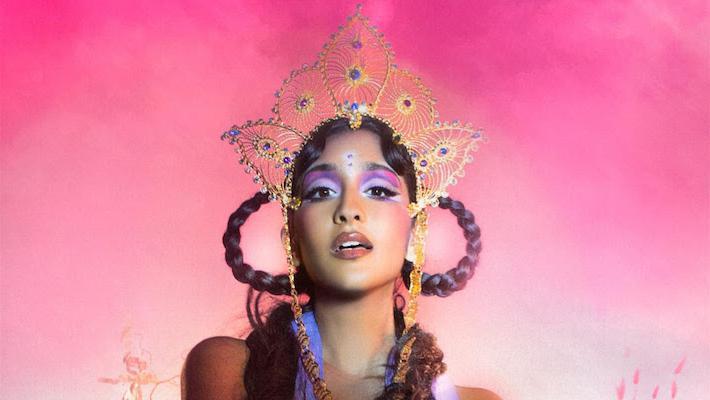 On Feb. 11, 2022, Raveena Aurora took us to an intergalactic world of a brown space princess. Her second studio album was out of this world, to say the least.

Raveena Aurora, known for her softer, angelic voice and relaxing, meditative music has now expanded her sound. “Asha’s Awakening” featured songs with a more upbeat r & b influence which created a new facet to her vocal range, as well as instrumentals. The second half of her album resembled her original slower paced songs, the project ended with a guided meditation.

The album featured a variation of worldbuilding uniquely created for this album. The premise featured a Punjabi space princess named Asha. According to Aurora in an interview with NPR: “She lives in Punjab [India] in ancient times,” Aurora said. “Asha gets transported to a distant planet, called Sanataan. There, the aliens teach her advanced spiritual teachings and magic. She lives there for a thousand years and becomes a princess — but misses human love and sensuality,” Aurora said.

Princess Asha returns home in search of some sort of connection with humanity to experience intense emotions once again.
“Asha’s Awakening” noticeably embraces Aurora’s South Asian heritage by including a variety of influences from a very specific time period.
On Instagram, Aurora said: “[The album was] Influenced by these two specific eras when musicians and Western musicians were collaborating a lot during the 60s and 70s.”
The lyrics and message behind the songs can be deeper than the ear-catching tune. The song “Rush ” was written to express the exotification of brown women and women of color. Aurora wrote this song to combat the exotification she has previously experienced. Her lyrics say: “somewhere in the jungle. There you’d find a lover, she could cure everything ” and “prey on her exhaustion, listen to her calling.” The jungle represents a foregin exotic land that she is from. The second lyric shows that people use exotification of women of color for their own pleasure and that it’s degrading but society often flips it on its head to make it seem like it’s something we should be thankful for.

Themes of meditation and healing have always been a crucial part of Aurora’s work. This influence is from her family’s background and cycles of generational trauma she’s talked about.

Her family are the descendants of the Sikh genocide that happened in India in 1984. Such a recent tragedy not only affects those who were harmed by it, but their descendants as well. This is one of the reasons why healing has been such a central part of Aurora’s work and why she added a guided meditation called “Let Your Breath Become a Flower” at the end of “Asha’s Awakening”.

Aurora will be going on tour for the second time. She is coming to Detroit at El Club on May 8th, 2022 and tickets are available on her website. She will be touring with smalls artist, TWEAKS and will be touring all over America. Her first stop being Coachella.

Raveena Aurora is more than groundbreaking. She is Earth-shattering. To see a queer, brown woman embracing her culture is inspiring in itself. The way she is able to flawlessly incorporate her culture into a music industry clouded with prejudice and white supremacy is resistance. It’s a message to every brown girl, every woman of color, every person who has felt belittled that you don’t have to leave behind an essential part of who you are in order to create, to make music. Aurora teaches us that you must incorporate every part of yourself in your creative endeavors in order for it to be truly yours, truly authentically a masterpiece.

Raveena Aurora showed me that simply creating as a brown woman in a world not created for our success is not just beautiful, but revolutionary.