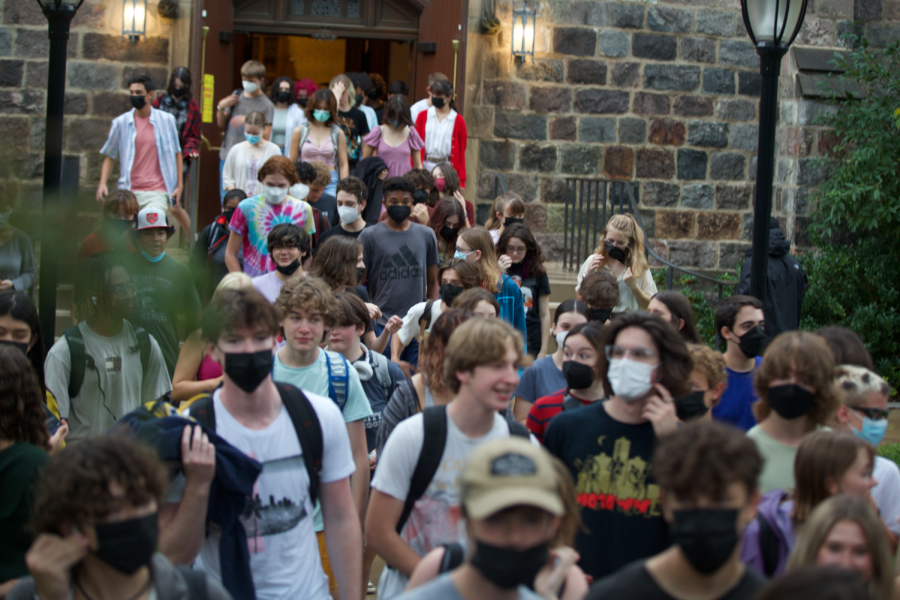 Community High School (CHS) students triumphantly returned to school on Monday, Sept. 29, in the first Welcome Ceremony hosted fully in-person at St. Andrews Church since before the pandemic. Amidst the hot and humid morning, 500 students squeezed into the pews to witness the first “full return” since 2019, kicking off the new school year with a student-hosted hour of music, staff introductions, and loud enthusiasm.

Like the rest of the school, freshman Neila Shee found the heat somewhat distracting. Nonetheless, she counts the ceremony as a successful start to her first day of school. The music provided by the CHS jazz band was her highlight of the morning: for Shee, it was inspiring to see what CHS could offer for her and her interest in music.

“The jazz at the beginning was definitely my favorite part of the ceremony,” Shee said. “I’m a big fan of jazz, so I’m excited to be in the jazz band and get better at playing.”

The ceremony also featured a spotlight on CHS’ history. 2022 marks the 50-year anniversary of CHS as a school, and the 100-year anniversary of the school building, formerly known as Jones School. Jones, an elementary school until 1965, was a keystone of Ann Arbor’s historically Black neighborhood of Old Fourth Ward, which we now know as Kerrytown. Speakers including Black Student Union members, CHS teachers, and a former graduate of Jones school spoke on the topic, introducing the theme for the coming school year: a celebration of the history of the building and of Ann Arbor’s Black community. This year, CHS teachers are looking to raise $30,000 to install a historical marker for the building in honor of the anniversary, fundraisers and talks for which will take place throughout the school year.

Every student club, as usual, was invited to present a 20-second feature on their missions and activities. This year, old highlights such as Zebrotics (the CHS robotics team) and Community Ensemble Theatre were joined by newer features such as Feminist Literature Club and a lifestyle app development team. All CHS students are encouraged to attend the club fair on Sept.16 to learn more.

The ceremony concluded with exit music from the jazz band as all 500 students filed out of the church, ready to spend time with their forums and get started with the first day of the 2022-23 school year.