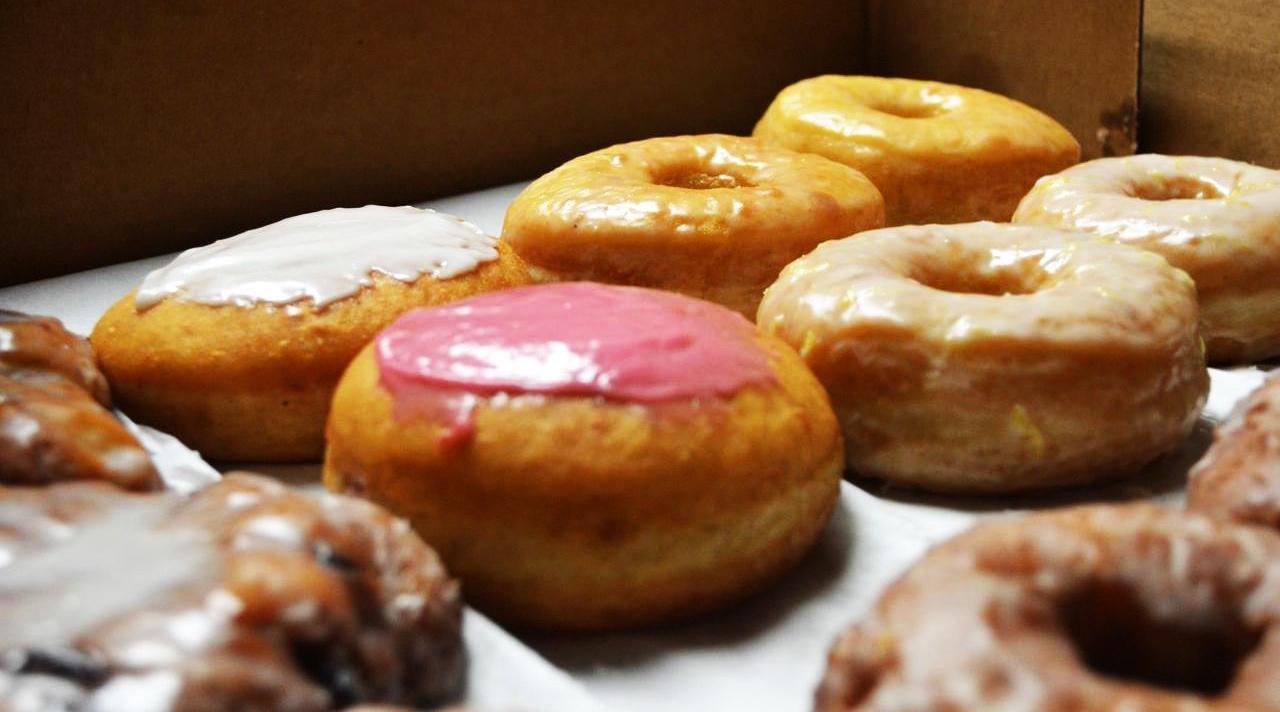 A Detroit legacy through hip-hop and donuts

It was a brisk Saturday morning, around 7:15, and Herman Hayes had just finished dropping off a batch of donuts at Lafayette Laundry in Detroit. Hayes, in a fleece zip-up and Detroit Tigers hat, has been a baker since 1979, when he started at Avalon Bakery in Detroit. After his first drop-off, he stopped by Avalon to grab some coffee and exchange salutations before once again hitting the road for four more stops. Driving around the city in a red two-door Ford Escort and dropping off donuts to be sold at various vendors may seem a bit unorthodox, but Hayes has ambitious plans for his donut business, Dilla’s Delights, and a passionate, heartfelt cause to match.

In 2006, James Yancey, the Detroit rapper and producer better known as J Dilla, tragically passed away from lupus at the age of 32. Dilla’s uncle, Herman Hayes, loved Yancey, and always remembered his affinity for donuts. The last album J Dilla made, while on his deathbed, was titled “Donuts”: an homage to the food that he loved. Hayes felt that early on he had this connection to Dilla through his donuts. However, it didn’t end there. “With James, it was more than just donuts. Donuts was beats, donuts was money, donuts was ladies,” Hayes says. For J Dilla, donuts represented the whole picture. Hayes feels honored that Dilla named his final album “Donuts,” but it’s nothing more than that. Dilla loved the delicious treat as a kid, and now Hayes feels that he is representing Dilla through his donuts. “If he was here, I’d be making them for him now.”

However, the donut shop isn’t the only thing that has paid homage to Dilla. The music community in Detroit shared in remembering Dilla, and remembering his legacy became a “hip hop thing”, according to Hayes. When Dilla died, the family got lots of support from the hip hop community. “They embraced us,” Hayes says. “Hip hop is not just about clothing and rap, it’s about taking the culture into society. That’s what we brought as far as the lupus walks, it brought something that hip-hop represented, us taking a stand and representing music and medicine, and doing walks and doing things to show that.”

The lupus walks, which were held in cities like Los Angeles, Atlanta and Chicago, have raised a lot of money for the J Dilla foundation, run by Hayes’ sister, Maureen Yancey, and have also raised awareness about the dangers of lupus. The walks were discontinued about two years ago due to lack of funding, but Hayes continues to fight for everything the J Dilla foundation stands for. “We plan on supporting the foundation, we plan on supporting lupus [research], and his daughters, and my sister,” Hayes Says. On June 28th, a day for the daughters was held outside of Avalon Bakery, with a tent set up and Hayes DJ-ing. Dilla’s younger brother, John, has also worked to represent Dilla, appearing in a music video for the song “Won’t Do”. Now, he is a rapper, known as Illa J, collaborating with the same artists who often worked with Dilla, and frequently rapping over Dilla’s instrumentals.

“[Lupus] is predominantly a women’s disease; that’s why he was misdiagnosed,” Hayes says. This misdiagnosis was just one of the many tragedies that struck the Yancey family. While Dilla was in the hospital, his mother lost her house, and after Dilla’s death, the family lost the rights to the estate and its financial assets. Now, through Dilla’s Delights, Hayes is looking out for his sister (Dilla’s mom), Dillas siblings, and his children. He wants to give back to the family what Dilla was probably trying to build for them. “That’s why I’m taking a stand. They [Dilla’s daughters] have been totally screwed from the estate situation,” Hayes says. He feels that it’s vitally important for Dilla’s daughters to be involved with the donut shop and to eventually become CEO’s. The donut shop is Dilla’s shop, so it is only right that it should be owned by Dilla’s daughters. The girls are slowly learning, but eventually they will learn how to bake the donuts, and Hayes hope they will be able to run the downtown shop, Right now though, they are just selling donuts and learning about the intricacies of the business.

Around 7:45 A.M., Hayes sets out to make his second drop of the day, to a coffee shop and performance space in midtown Detroit. When Hayes arrives at 1515 Broadway, the first thing he does is check up on his donuts, prominently displayed in a clear pastry case right behind the front window. He grabs the tray of donuts and takes it to the back to wash it off and put a fresh batch of donuts on it. Each of his donuts has its own original name, which draws some connection to music and the Detroit community. His Conant Gardens glaze pays homage to the Conant Gardens neighborhood in Detroit, which was the birthplace of Dilla’s first music group, Slum Village. The Rasul Wasi donut, filled with raspberry currant, honors the late rapper Baatin, Dilla’s friend in high school and a long-time collaborator.

With all of the donuts ready to be displayed, he puts them in the pastry case and writes down which donuts he drops off. On the front of the pastry case is a small, torn up sticker with a Dilla’s Delights logo, designed by the graphic artist The Mighty Junebugg. Seeing the condition of the sticker, Hayes runs out to his car and gets a brand new one. “We’re a community, and we’re going to support each other. We keep it in the community,” Hayes says. “When somebody wants coffee, I’ll send him over here.”

About a block away from 1515 sits an abandoned hotel with a little black mailbox reading “Dilla’s Delights LLC” on the door. While the majority of the building is being renovated into new apartments, a small room on the bottom floor will eventually become the donut shop. Still raw and unfinished, Hayes has a vision for the space, including a DJ booth in a loft.

Opening Dilla’s Delights has had its struggles, and the construction company has caused the opening of the shop to be delayed for about a year. Of course, the    biggest problem has been money. Hayes plans on doing a kickstarter for the business, but it’s a slow process, and challenges often arise.

Around 8:45, Hayes hops into his Escort, and heads towards an area in the West Village neighborhood of Detroit, an area that has struggled in the past. The area has been revitalized by small stores such as Sister Pie, or the Parker Street Market, where Hayes sells his donuts. David Kirby, the owner of Parker Street Market, opened the store to sell Michigan-made foods, and help out small businesses, such as Dilla’s Delights. “People not only love the donuts, but also the story behind them,” Kirby says.

While Hayes makes and delivers the donuts, his partner, Mike Vanover, dressed in a Tigers hat and a Dilla’s Delights t-shirt, has made a different part of the business his home. In a small church on the corner of Grandy and Erskine, Vanover’s Catalina mobile home sits in a building that he hopes will soon become the business’s commercial kitchen, as well as a tribute to Dilla. “The shop downtown’s limited on square footage,” Vanover says. “But when you have a playoff game, the midtown area is going to flood. We need to cater to that.”

Of the three flat sides of the building, one of them has a mural with the late producer’s face, and the words “His 45’s and music scene/don’t scratch the surface of this dream/Detroit city legacy/Dilla play one more for me.” The remaining sides are covered in graffiti, but plans have been made for them to be painted as tributes to Dilla, including the sheet music to “Diana in The Autumn Wind” by Gap Mangione, the notorious sample in the J Dilla production “Fall in Love”. “This is what we’re doing in Detroit for Dilla,” Hayes says. “It’s not just a donut shop, we’re trying to make him visible all over the city.”

Hayes learned how to bake donuts at Dawn Donuts, a large donut franchise in Detroit. He was attending chef school at the Detroit Athletic Club when he decided he needed to bring in some extra income, so he began baking donuts. Before he opened the shop, he took a break from baking donuts, but when he came back, it was just as easy as before. “I felt I was destined to do this,” Hayes says.

The way Hayes tries to make donuts is similar to the way Dilla would make beats: as a total perfectionist. “[Dilla’s beats] would be something classic and something beautiful, and everyone in the room would feel it, but if he didn’t feel it, he’d erase it,” Hayes says. He feels he must treat the donuts the same way if he is going to put Dilla’s name on them.

Like Dilla, Hayes is humble about his business, and like Dilla, Hayes rarely gives interviews. He did some interviews early, but was not happy with the results. The article didn’t mention enough about the daughters’ situation after Dilla’s death, or their vital role in the donut shop. For Hayes, family comes first. He remembers stopping by his sister’s house and seeing Dilla, Baatin, and other high school friends in the basement working on music. “My sister was a free spirit who would… just let them be creative. You know, even though they were a church-going family, she let them say and do whatever they wanted if it was in the arts,” Hayes says. Hayes acknowledges that this played a crucial role in Dilla’s development as a producer. “It was weird to be in a Christian household and in the basement you’re hearing Proof, and you’re hearing Baatin, and Royce Da 5’9”, as teenagers, spitting all kinds of obscenities,” Hayes says.

Hayes favorite song of Dilla’s is “Don’t Nobody Care About Us” from Dilla’s early work with Phat Kat. “If it gets in your head, it may not come out,” Hayes says. This could be said about most of Dilla’s work, as his samples and catchiness are part of his hallmark.

J Dilla will always be remembered as one of the most influential and beloved musicians in hip-hop, and though Dilla touched the hearts of everybody who listened to his music, nobody was affected more than the people who raised him. “We can wear the ‘J Dilla changed my life’ t-shirts better than anybody,” Hayes says. “He changed the directions of our lives.”