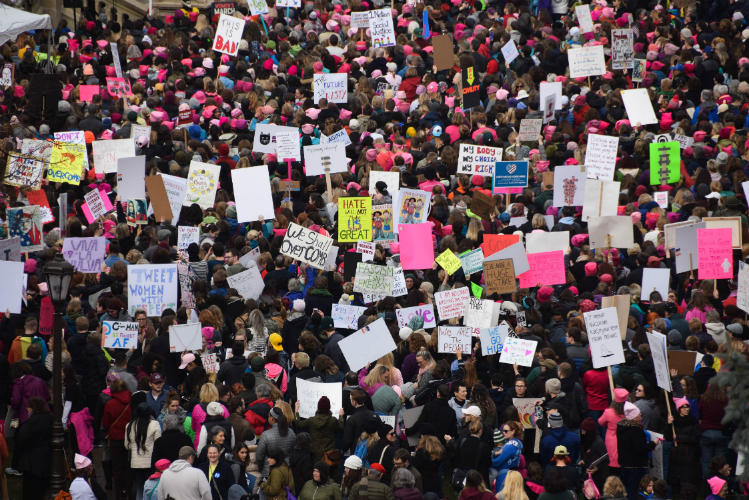 On Saturday, Jan. 21, one day after President Donald Trump’s inauguration, cities across the United States held Women’s Marches, including Washington D.C., New York City, Los Angeles, Chicago, Columbus, Charlotte, Detroit, Ann Arbor and a countless number of other cities around the world. An estimated 500,000 men, women and children marched in Washington D.C.; around 750,000 marched in Los Angeles; and 11,000 participants marched in Ann Arbor, the highest count in all of Michigan. The Women’s March took place in over 600 different cities nationwide. It was the largest protest around the world and with over two million people made history.

The Women’s Marches were in support of women’s rights, immigration rights, equality, minority rights, climate change awareness, LGBTQ rights, acknowledgement and support of arts and culture. Chants in Ann Arbor were lead by the crowd yelling “Love trumps hate,” “What do we want? Justice. When do we want it? Now,” and “No means no and nothing less. How we dress does not mean yes.” Signs throughout the march read ‘courage can be contagious’, ‘I am just picking up where my Grams left off’, ‘It’s about human rights’, ‘Keep your tiny hands off my rights’, ‘Not paid to protest, but if I were it would be 79 cents per dollar’.

In Donald Trump’s inauguration speech, he said, “We the citizens of America are now joined in a great national effort to rebuild our country and restore its promise for all of our people. Together we will determine the course of America and the world for many, many years to come. Today, we are transferring back the power from Washington D.C. to the people.”

These people who participated in the Women’s Marches have spoken. They want peace and equality for all. They want a nation where everyone is diverse and is treated the same. They want to be recognized and acknowledged as a human with rights. They want the same basic rights as a white man.

In Ann Arbor, crowds of men, women, children gathered on Liberty Street and Fifth Street. From here, the march made its way to the front of the Hatcher Graduate Library in the Diag, where the rally was held. Speakers included students from the Progressives at the University of Michigan, staff of the Women’s March and other activists. 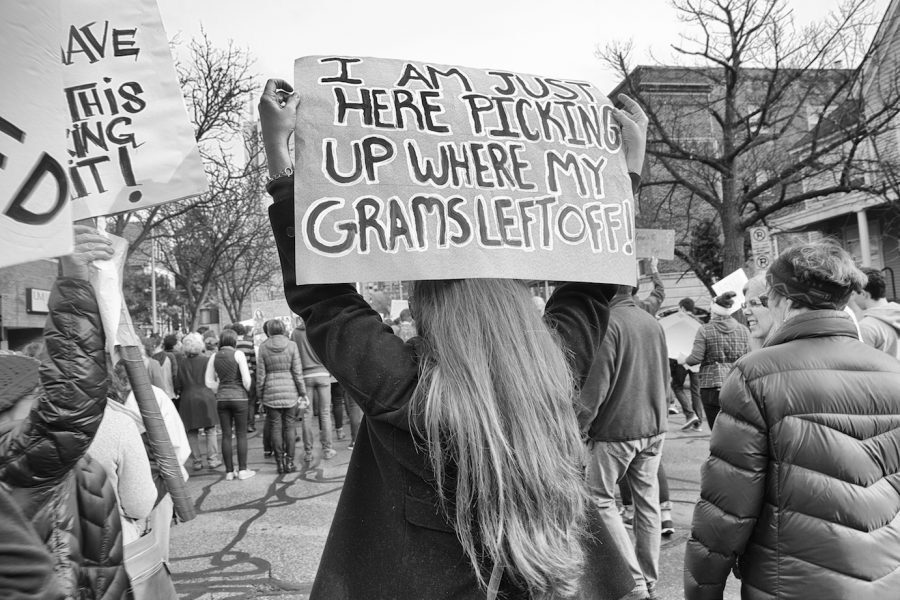 Gallery|14 Photos
Chandra Ervin Photos
A women holds a sign that describes that she is in the same place her Grandmother was, protesting for rights.

In Ann Arbor, crowds of men, women and children gathered on Liberty Street and Fifth Street. From here, the march made its way to the front of the Hatcher Graduate Library in the Diag, where the rally was held. Speakers included students from the Progressives at the University of Michigan, staff of the Women’s March and other activists. 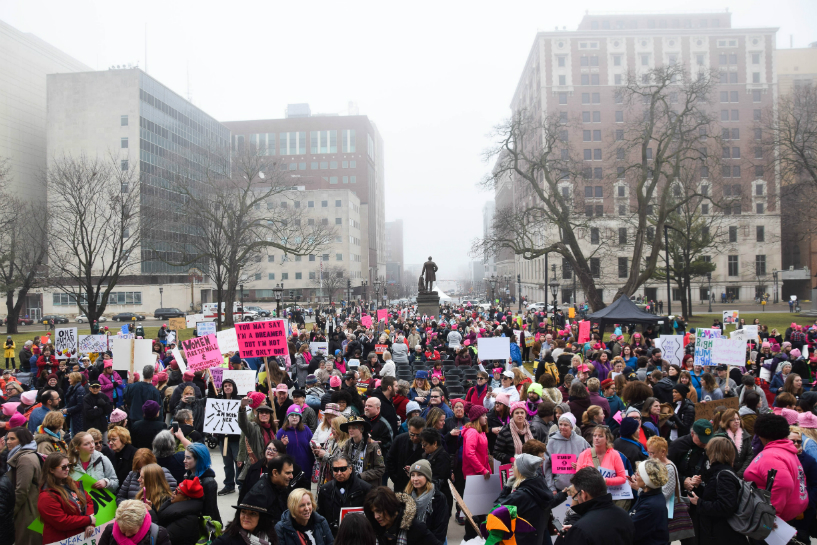 Gallery|17 Photos
Thousands gathered on the steps of the Capitol Building in Lansing, MI to advocate women's rights as part of the many marches taking place across the United States.

On Jan. 21, 2017, the day after President Trump’s inauguration, millions all over the country gathered to advocate for women’s rights. In Lansing, the state capital of Michigan, people of all ages brought handmade signs, listened to speakers and shouted chants. Gretchen Whitmer, former Democratic member of the Michigan Senate, is currently running for Governor of Michigan in the 2018 election. After greeting protestors, she gave an uplifting and well-received speech to the crowd. 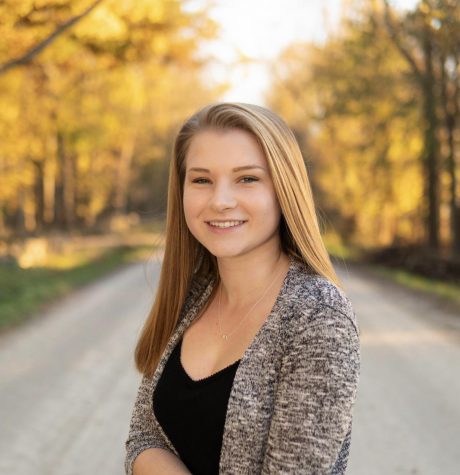 Madie Gracey, Copy Editor
Madie Gracey is a senior, and this is her fourth year on staff. She enjoys being playing volleyball and spending time with her friends. Recently, she started a journalism club at King Elementary School for the fifth grade class and she plans on attending WMU or KZOO for psychology this upcoming fall. 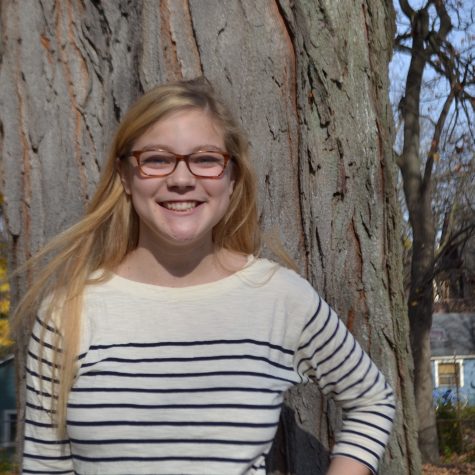 Alexandra Hobrecht, Print Editor-In-Chief
Alexandra is somehow a senior this year. Much to the concern of her friends, she likes having unread messages in her email inbox (7,484 so far). She enjoys pretending she is in a lifelong music video and impresses people with her singing skills. Someone once even compared her to the Muppets, though she has yet to audition. She quotes The Office daily, is currently learning sign-language and loves peanut butter toast.
Leave a Comment 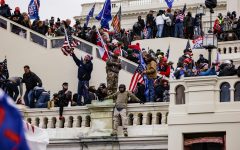 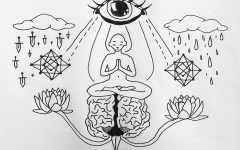 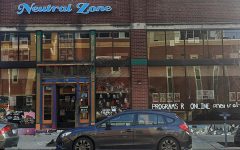 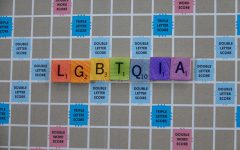 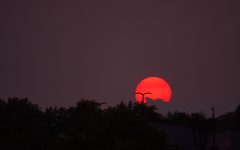 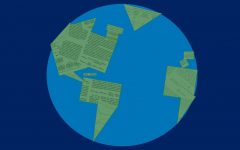 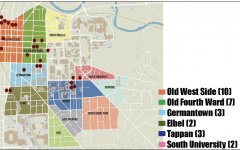 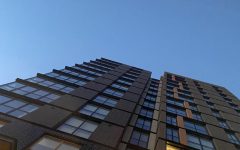 Without development, economic growth can “tear a city apart”