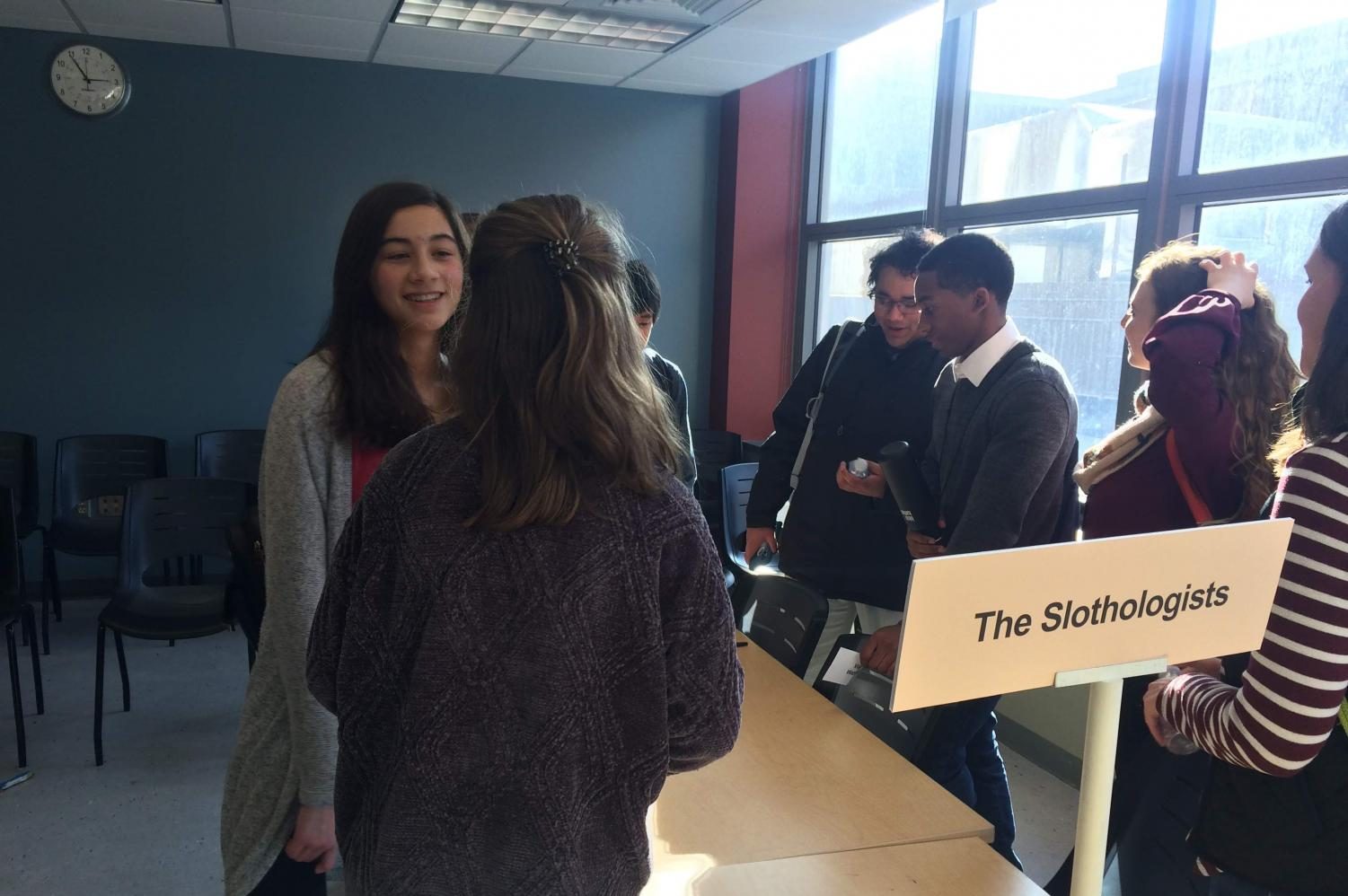 “Ms. Jones, Ms. Jones!” Huron junior Eleanor Lin said as her teacher walked towards her down the first floor of Mason Hall on Sunday, February 3. “Can you think of an example of a product that the government took away from the public because not everyone had access to it?”

Lin and her classmates, Nathan Chervin and Daniel Muenz, were anxiously preparing for potential questions that could be thrown at them in competition during the sixth annual Michigan High School Ethics Bowl, organized by local organization A2Ethics. All three were members of Thoreau Understanding (named for philosopher Henry David Thoreau), one of two teams from Huron High School that were competing in the Ethics Bowl.

“The idea [of the Ethics Bowl] is to bring ethics and philosophy to the schools through an extracurricular program,” said Jeanine DeLay, the founder and president of A2Ethics. “The bowl is produced in conjunction with the University of Michigan Department of Philosophy outreach program.”

Along with the Slothologists, Huron’s second team, Thoreau Understanding met every Wednesday after school from September to February. The meetings, led by Huron teacher Katie Jones and University of Michigan Philosophy student Brendan Mooney, prepared the students for the competition by teaching them ethical theory, practicing analyzing situations and helping them develop their public speaking skills.

Eleven schools competed on Saturday for quarterfinal qualification, and on Sunday, teams from Huron, Pioneer, Greenhills and Saline had made it far enough to compete for the state championship. The winner of the state competition will represent Michigan at the National High School Ethics Bowl at the University of North Carolina Chapel Hill in April.

Throughout the course of first semester, the teams became experts at fifteen ethical case studies, all of which are issued by A2Ethics in October. Each participating team is given the same case studies and equal time to practice debating them.

“There are pieces coming from medical professions, there are additional cases coming from the media, we’ve had a few cases on the arts, we’ve had cases on business,” DeLay said. “Members of a particular profession or occupation are presenting real situations. They are writing some of the very common ethical issues that they find in their workplace. The students get to grapple with with issues that are not abstract, but actually very down to earth.”

Just minutes before the competition, teams like Thoreau Understanding gathered along the hallway, preparing for the round. Chervin and Lin were trying to get ready for a case study that debated the ethics of the government offering a pill that allowed the user to live forever.

“They make the cases so incredibly nuanced,” Chervin, a junior on the team for his second year, said. “Usually I can formulate an ethical explanation to a gut reaction, but the case studies force you to sit and think about basic principles.”

Soon, the quarterfinal matchups were announced, and the teams dispersed to their competition rooms — all small University classrooms. Thoreau Understanding would be competing against Greenhills Green for the quarterfinal round.

The sweltering classroom was packed full with judges, competitors and audience members. The teams sat in silence, anxiously waiting for the competition to start. Some students, like Chervin, tried to mentally prepare for the fast-moving competition.

“I was worried I’d say something stupid and ruin the whole thing for my team,” Chervin said. “Sometimes I talk for too long and don’t say things very concisely, so I was worried something would slip out that was incorrect or somehow a counter to our argument.”

Despite nerves, Thoreau Understanding launched into competition mode as soon as the round began. They were chosen to go first out of the two teams, and therefore given two minutes to gather a concise argument about the ethics of gerrymandering. Once the two minutes were up, they had six minutes to present their argument: that gerrymandering in favor of one’s own party is always morally inappropriate.

Next, Greenhills Green was given one minute to confer, and then had three minutes to present questions to the Huron team, who then had three minutes to respond. Lastly, they were given ten minutes to be asked and to respond to questions from the three judges. After Thoreau Understanding was finished with their argument, the entire competition flipped; Greenhills Green was then given equal time constraints to present their case on the ethics of anonymous journalism.

After the scores were tallied, the scorekeeper announced Greenhills Green to be the winner of the round, meaning they would be moving on to the semifinals. Though some members of Thoreau Understanding were disappointed, senior Anna Romeri felt content.

“I thought we did a good job of being consistent in our argument and reiterating that to the judges,” Romeri said. “It was my last one in high school, but I know in college I’ll probably do Ethics Bowl, so I think it was overall a good experience.”

Meanwhile, as Thoreau Understanding debriefed their round, The Slothologists earned a victory over a team from Pioneer; they moved on to the semifinals, and the entire process repeated. The Slothologists were randomly paired with Greenhills Green, and they moved into their competition soon after the quarterfinal ended, this time addressing the bioethics of do not resuscitate/do not intubate situations and keeping someone that has been declared brain dead on life support.

“Having an opportunity to talk to high school students about how they can stir the world is probably the most satisfying part of this job,” DeLay said. “I get to meet students and talk with them about their perspective on ethical and philosophical issues. And that is just really thrilling to me.

Though the sixth annual Ethics Bowl had participation from eleven schools, only Huron and Pioneer had teams representing Ann Arbor Public Schools. Skyline plans to have a team in the 2019-2020 school year, but there are currently no plans for a team at Community.

According to DeLay, starting a team at your school is simple. She said the only requirements are at least five interested, committed students that will be at the school next year, and a faculty member willing to advise. Once a school has those minimum requirements, they can get in contact with DeLay to formally sign up for the bowl and to get assigned a philosophy student from UMich, who would serve as an instructor in ethical theory.

“Community High students are very self-sufficient, and we’ve been kind of surprised that Community hasn’t had a team,” DeLay said.

Though neither team from Huron was victorious this year, many team members felt proud of their competitions and looked optimistically towards next year.

“I mainly joined because I had always been interested in the difference between right and wrong,” Chervin said. “I decided to join the club at Huron in an effort to learn what I could about making ethical and moral decisions. All the people interested in debate would love the conversation that goes on in Ethics Bowl. It makes me feel like a hardcore intellectual.”

“I’m really looking forward to being a senior and giving it one last ride,” he continued. “My teammates in my grade are amazing, and I’m so excited to see what we can do next year.”